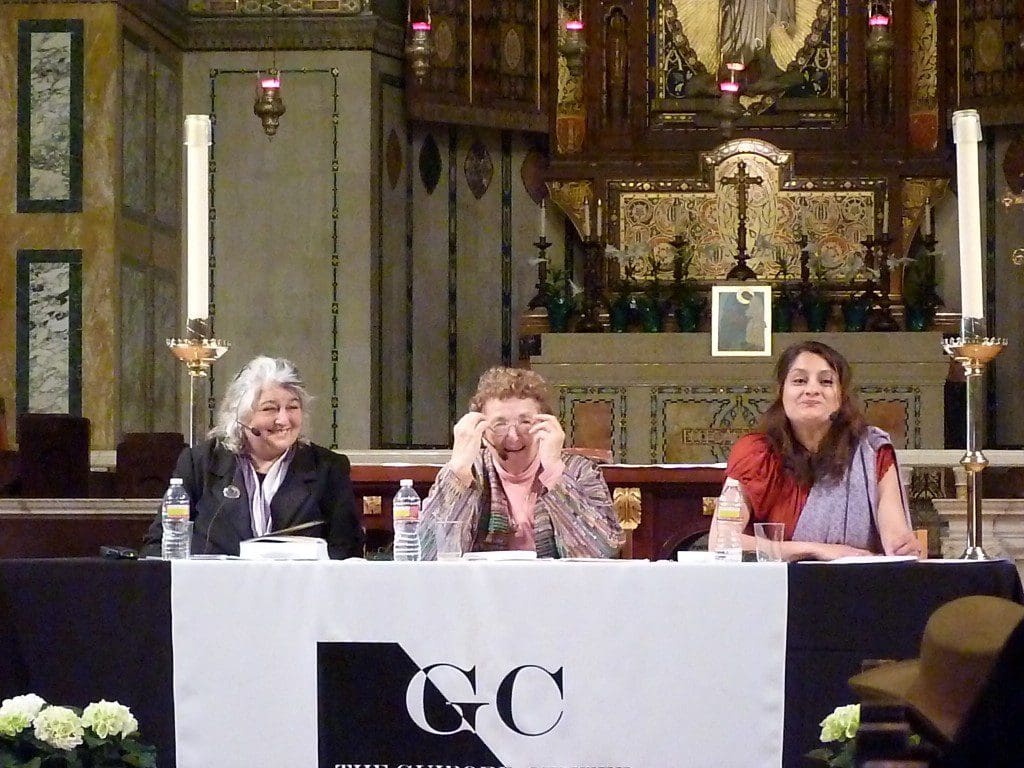 Those who heard these three experts’ lively feminist exploration of Genesis left with much to ponder from the rich discussions of the very different creation stories found in Genesis and the Holy Qur’an. [While other presentations of The Guibord Center’s Major Speakers Series have aimed more at the heart, this conversation specifically strove to make listeners think differently.]

A few of the many thoughtful points to ponder:

One of the first theologians to integrate feminist perspectives and concerns into the interpretation of Jewish texts and the renewal of Jewish law and ethics, Dr. Adler is Professor of Modern Jewish Thought and Judaism and Gender at Hebrew Union College, Los Angeles.

“Genesis 1 and Genesis 2-3 are two different stories representing two different ways of living in the created world. Genesis 1 is harmonious and egalitarian and the world is a creative world. This is a process. Genesis 2-3 is a story about the origins of patriarchy and the results in a world that is objectified and hierarchized.

“We are not condemned to live in the world of Genesis 2-3 forever. We just have to learn how to get out of it … and to hold up the vision of Genesis 1 and its respect for differences,.. to remind ourselves that we are blessed, not cursed, and can use our creative powers to mend the broken world.”

A major voice in Christian feminist theology for over three decades, Dr. Radford Ruether has authored hundreds of books and articles and is one of North America’s most widely read authors in this field. She is currently a visiting Professor of Feminist Theology at Claremont School of Theology.

Dr. Rosemary Radford Ruether highlighted the history of the interpretation of Genesis 1:27 and helped those gathered to understand that we often follow an interpretation instead of the text.

She urged participants to consider the profoundly transformative possibility that being made in the image of God – we are complete people – not half-beings in search of our other half [in order] to be whole. That challenge to traditional interpretations begins to turn religion inside out. What does it mean that we were made in the image of God? What are the implications?

While Jews are well accustomed to wrestling with the implications of sacred texts, many Christians are not. They have been taught to accept the interpretations they have been given as a matter of faith. Daring to ponder or question the deeper implications of these actual texts has been seen as both arrogant and heretical.

Dr. Ruether also addressed the word “domination,” from which women were excluded, and “spiritual capacity,” in which women were included. She called for a profound and well-justified rethinking of the meaning of “dominion.” This term, in its current usage, has been mistakenly used as justification for humans to devastate the earth and its exquisite balance of creatures.

“Surely,” she said, “that was not God’s intention.”

A Muslim scholar of Judaism and Islam at Antioch University, Dr. Afridi has spoken at interfaith conferences worldwide on Judaism and Modern Jewish Diaspora, her area of expertise.

Eve is not mentioned by name. As Adam’s wife, she and Adam are both God’s creatures who have transgressed together in the Garden of Eden and will be judged equally. Equal responsibilities bear upon both males and females. “The Qur’anic view of women is no different than men except they are referred to as a locus of receiving the message and many more male names inundate the Qur’an. Today there are many ongoing dialogues about the Qur’an and the role of women. The problem is with patriarchy and the idea that only men can issue the Qur’anic message.”