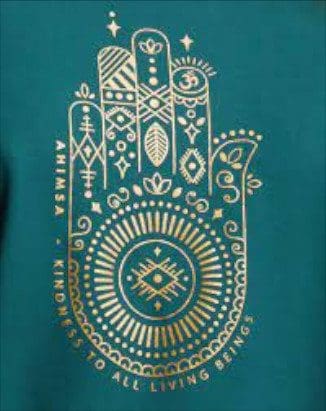 In this conversation moderated by Dr. Lo Sprague, Tahil Sharma discussed the history and meaning of ahimsa – the concept of nonviolence. He then shared some personal reflections, followed by panelists Aziza Hasan and Rev. Najuma Smith-Pollard. Their words hit hard as each shared from the heart about experiencing and confronting the racism and hate long faced by the Black community and other people of color.

The Relationship Between Nonviolence and Racism

Tahil began by explaining that ahimsa is a core value of Jainism, Hinduism and Buddhism, religions that all originated in South Asia. Ahimsa was the inspiration for Mahatma Gandhi and others who led the South Asian movement for independence from the British. It also became the principle for Dr. Martin Luther King and leaders of the U.S. nonviolent movement, who used peaceful resistance to defeat injustice. Today, ahimsa continues to inform us about how to engage unjust systems and practices and equalize our society.

A Mandate to Engage in Antiracism

Tahil went on to share that, being of South Asian descent, he has experienced racism all his life. When he realized racism existed even in his cultural and religious traditions, he had a crisis of faith. And he saw unintentional white supremacy lurking in the interfaith community, where few people of color held decision making roles.

For Tahil, these situations posed hard questions. In looking at ahimsa, he noted, our faith traditions mandate that we engage in antiracism. But instead, these communities, which should be at the forefront in fighting racism, are falling into it. “What do we do in the face of living in a thoroughly racist system?” he asked.

Ahimsa: Respect for All Living Things

Aziza said her main takeaway from Tahil’s reflection was that ahimsa is respect for all living beings. She told a story from the Qur’an in which God created Adam from mud and breathed life into him. But Iblis (Satan) refused to bow to Adam, calling him “dark mud,” and thus was cast out of heaven. Because God’s own breath is in every being, Aziza noted, we should see all living creatures as sacred.

Another takeaway was the idea of self control, which she saw illustrated in Ramadan. Every year, Muslims complete the month of fasting with support and encouragement from one another. Likewise, Aziza said, in a time of global pandemic, rampant violence and hate crimes, we need everyone to help address these challenges with empathy, inclusion, and radical love. Her organization, NewGround, leads the way in this work by bringing Muslim and Jewish people together to dialogue with and learn from one another.

Confronting Racism While Rooted in Love

Rev. Najuma then shared about righteous confrontation. As a Black woman, she said, she has never known a day when racism wasn’t part of her life. Growing up and learning about the civil rights movement, she saw that Dr. King and others chose a nonviolent approach. Yet at the same time, she noted, they were “absolutely confrontational.” So as her parents taught her to love and respect others, she learned that love also includes confronting wrongs. And now, as a pastor, Black woman, and civic engagement leader, she has a mandate to confront racism and injustice.

Rev. Najuma encouraged us to continue in nonviolence but also to confront when needed, staying rooted in love for others and ourselves. “That’s where I find hope – that there are people that understand the larger concept of love,” she said. “And that love is confrontation, love is speaking truth to power, love is standing up for my brother and sister . . . whatever they look like.”

Our speakers opened up a thought-provoking discussion that challenged listeners in many ways. While the conversation covered much ground, it became clear that we’d barely scratched the surface of nonviolence and racism. The event ended with a promise of future events to continue the conversation. We hope these forums will offer a safe space where people can share painful truths and learn to understand one another in love and respect.