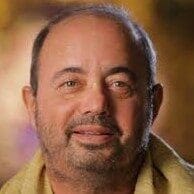 A Guibord Center Advisory Council member, Sura Das has represented the International Society for Krishna Consciousness (ISKCON) for many years. He also has long been fervently active in the interfaith community. Currently,  he serves as Vice President of Culver City Interfaith and the Interreligious Council of Southern California. In addition, he is involved with the Hindu-Episcopal Dialogues and Southern California Committee for a Parliament of the World’s Religions (SCCPWR). Sura is a head priest of ISKCON and works in management for Bhaktivedanta Book Trust, the Society’s publishing house.

In 1999, he started the Temple Bhajan Band. The group introduces the public to kirtan music and ancient Vedic chanting at yoga studios, houses of worship and festivals nationwide. An ISKCON member since 1973, Sura previously was temple president in Missouri for nine years and international president of the publishing house for seven years.