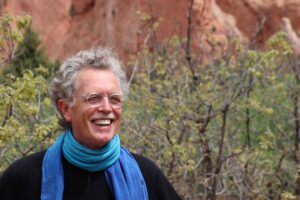 John Philip Newell (born 1953) is a Celtic teacher and author of spirituality who calls the modern world to reawaken to the sacredness of the earth and every living being.

Canadian by birth and also a citizen of Scotland, he resides with his family in Edinburgh and works on both sides of the Atlantic. In 2016 he began the School of Earth and Soul, originally called the School of Celtic Consciousness. He teaches regularly in the United States and Canada, as well as leading international pilgrimage weeks on Iona in the Western Isles of Scotland.

Newell earned his PhD from the University of Edinburgh. He has authored over 15 books, including A New Ancient Harmony, Sounds of the Eternal, and The Rebirthing of God. His latest major publication is Sacred Earth, Sacred Soul: Celtic Wisdom for Reawakening to What Our Souls Know and Healing the World.

Newell speaks of himself as “a wandering teacher” following the ancient path of many lone teachers before him in the Celtic world. These “wandering Scots” (known as scotus vagans) sought after the well-being of the world. He has been described as having “the heart of a Celtic bard and the mind of a Celtic scholar,” combining in his teachings the poetic and intellectual, the head and heart, and spiritual awareness as well as political and ecological concern. His writings have been translated into seven languages.

In 2020 Newell relinquished his ordination as a minister of the Church of Scotland as no longer reflecting the heart of his belief in the sacredness of the earth and every human being. However, he continues to see himself as “a grateful son of the Christian household” seeking to be in relationship with the wisdom of humanity’s other great spiritual traditions.