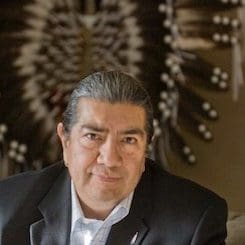 Forrest S. Cuch is an enrolled member of the Ute Indian Tribe. Born in 1951, he grew up on the Uintah and Ouray Ute Indian Reservation in northeastern Utah. Forrest was raised in the sacred Ute/Shoshone Sundance religion and joined his father and uncles as a sun dancer. He has also participated in sweat lodge ceremonies throughout his life and currently conducts ceremonies on his ranch. The ranch includes eight horses, some of which are used for equine therapy (horse medicine).  In addition to practicing Native traditions, Forrest serves as senior warden at St. Elizabeth’s Episcopal Church, Whiterocks, Utah.

Forrest holds a Bachelor of Arts degree in behavioral sciences from Westminster College in Salt Lake City. In his 38-year career, he has held many challenging positions, beginning with education director for the Ute Indian Tribe. He later served as tribal planner/administrator for the Wampanoag Tribe in Aquinnah, Massachusetts. Forrest also taught social studies and led the department for his high school alma mater, Wasatch Academy in Mount Pleasant, Utah. As executive director of the Utah Division of Indian Affairs (1997-2011), he published A History of Utah’s American Indians (Utah State University Press, 2000).

Throughout his career, Forrest has called attention to the ancient presence and contributions of American Indian people throughout the Western Hemisphere. He has addressed critical issues facing all American Indians, including racial injustice and environmental racism. Currently, he is working with spiritual leaders throughout the Western Hemisphere to usher in the new shift in feminine consciousness known as the New Earth and call attention to climate change and harm to Mother Earth. Forrest strongly believes racism and environmental injustice are interrelated. “How man treats man is reflected in how we treat the environment. We are witnessing a high degree of environmental violence and destruction which correlates with how we treat each other.”

Storyteller: Exploring the Injustices of Racism