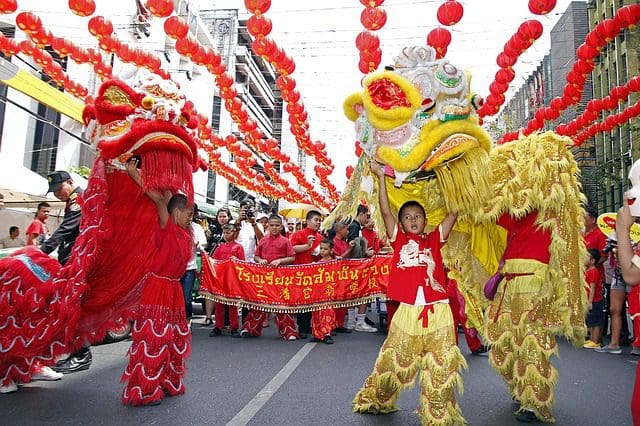 The Lunar New Year falls on the first day of the first month in the Chinese lunisolar calendar, in January or February. Often called Chinese New Year, it’s the most important celebration in Chinese communities. However, Korean, Vietnamese, Laotian and other Asian communities also observe it.

The holiday’s traditions began in ancient Chinese religions and astrology. Many are well known, such as the Chinese zodiac, based on 12 animals important to Chinese culture. Families put up red decorations and lanterns, and give red envelopes of money to children. Other important customs include paying respects to household gods and ancestors and enjoying a feast. Communities perform the traditional lion dance to bring good luck. 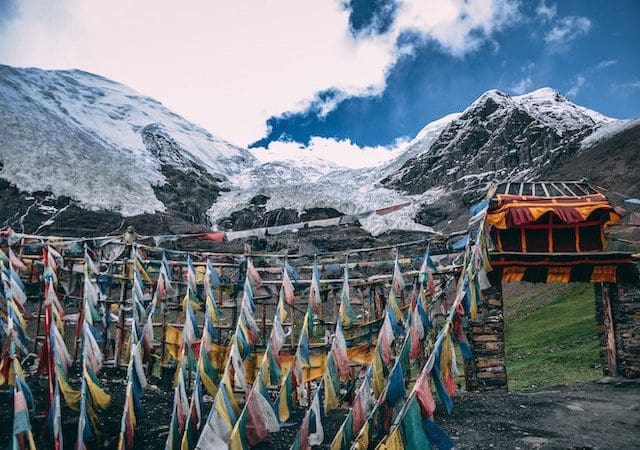 Losar, or Tibetan New Year, takes place on the first day of the first month of the Tibetan Calendar. It often begins on the same day as Lunar New Year, but can differ by a day or month. Losar dates back to when Tibetans followed the Bon religion, before Buddhism arrived. Each winter, believers held a ceremony to offer incense and other gifts to please the gods. After the region became Buddhist, the ritual turned into a harvest festival. Later, following the lunar calendar’s arrival, it became the New Year festival.

As it’s one of the year’s biggest festivals, families start preparing a month before the three-day event. They clean house, make new clothes, and put the eight auspicious symbols on the walls. During Losar, Tibetans visit temples, make offerings, hang prayer flags, perform rituals and dances, and feast with family and friends. For 15 days afterward, they hold parties and gatherings, ending with Chunga Choepa (the Butter Lamp Festival) on the full moon. 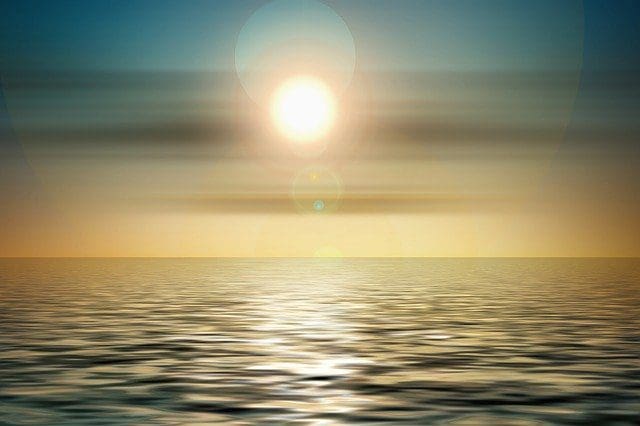 Mahayana Buddhists remember the Buddha’s death on Parinirvana, most commonly on February 15. (Theravada Buddhists mark this event with the Buddha’s birth and enlightenment on Vesak and Tibetan Buddhists on Saga Dawa Duchen.)

The Buddha died at age 80, after attaining enlightenment and then teaching for 40 years. At his death, he was in a state of meditation and reached Nirvana, a state of peace and freedom from the cycle of death, rebirth, and suffering. Believers celebrate his passing because, having become enlightened, he was freed from the physical world and its misery. Observances include meditating, visiting temples or monasteries, and reflecting on life’s impermanence and one’s own future death. Believers offer meditations for recently deceased family and friends to support them in their new existence. 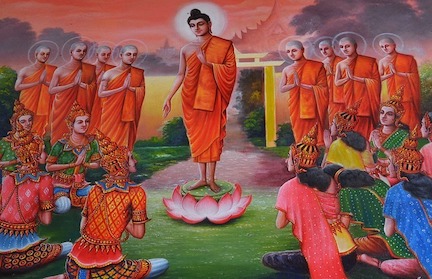 Theravada Buddhists in Southeast Asia observe Makha Bucha on the full moon of the third lunar month (February or March). It marks the day when 1,250 of the Buddha’s disciples gathered on the spot to pay him respects. During the meeting, these direct spiritual descendants of Buddha heard his summary of Buddhist principles.

The holy day is also known as Māgha Pūjā, Saṅgha Day, or Fourfold Assembly Day. “Fourfold” refers to four facets of the disciples’ gathering. (1) All 1,250 were Arahats, or enlightened saints. (2) The Buddha himself ordained all of them. (3) The saints assembled by themselves without being called. (4) It was the full moon day of the month of Magha. On this day, celebrants honor the creation of an ideal Buddhist community, or saṅgha. They aim to do only good, think pure thoughts, and visit the temple to perform acts of merit. 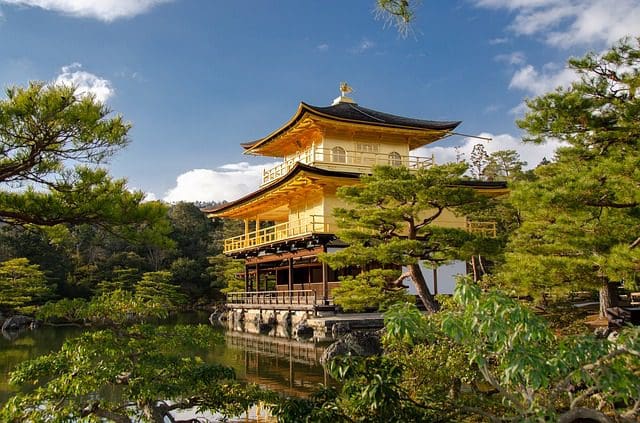 Japanese Buddhists observe Higan-e or Higan at the spring and autumn equinoxes. The festival starts March 18 or 19 and September 20 or 21 and lasts one week. “Higan” (short for to-higan), means “to reach the other shore” (of Nirvana or Enlightenment). It teaches six components: giving, precepts, perseverance, diligence, zazen (meditation), and wisdom. By practicing these, believers strive to rise above the world of delusion and reach Nirvana.

Customs include offering rice cakes and sweets at the family altar. Believers make offerings to Buddha at temples and pay respects to ancestors at the cemetery. 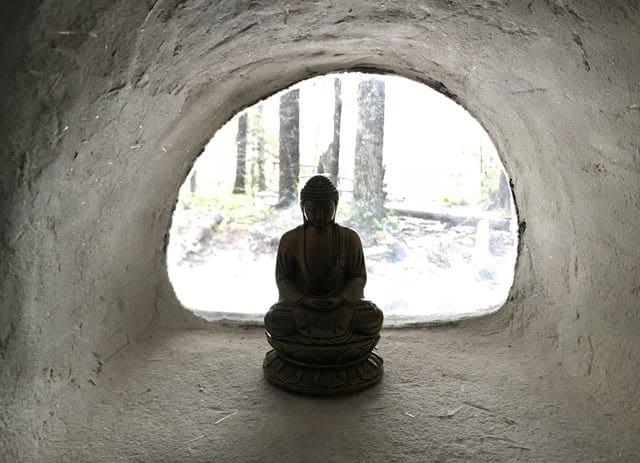 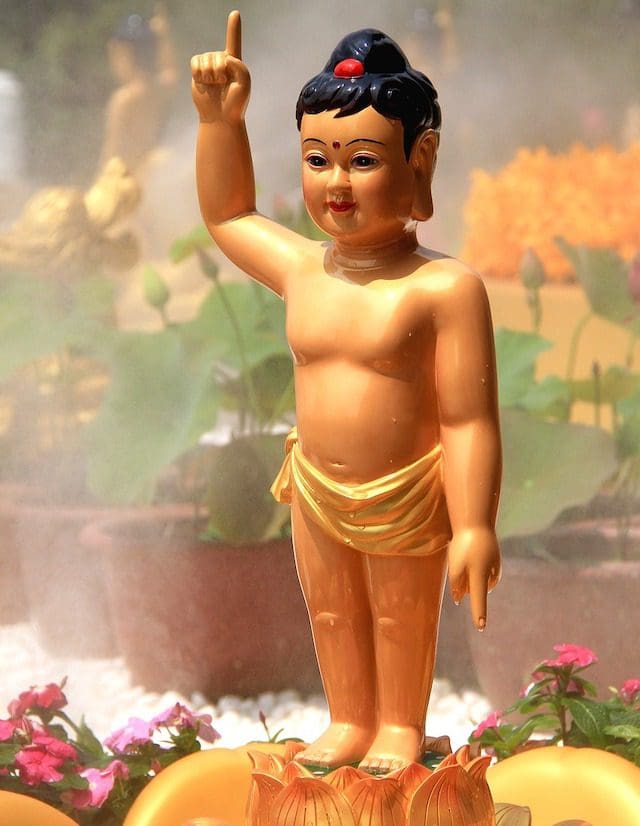 “However many holy words you read, however many you speak, what good will they do you if you do not act upon them?” ~ The Buddha

Prince Siddhartha Gautama was born 2,500 years ago to the royal family in a small Himalayan kingdom. He later became known as Gautama Buddha or Shakyamuni Buddha. Different Buddhist communities observe his birth on various dates, many in April or May.

Japan adopted the Gregorian calendar in 1873. In that country, Buddhists celebrate Hana Matsuri (Flower Festival) on April 8. Followers believe that at his birth, Buddha said, “Heaven, earth and I are all one person.” In line with this belief, temples have statues of baby Buddha pointing one index finger toward heaven and one to earth.

Believers decorate temples with flowers and wash the statues with sweet tea. Large public events take place across the country.

Chinese and Korean Buddhists celebrate Buddha’s birth on the eighth day of the fourth lunar month, usually April or May. In Taiwan, believers observe it on the second Sunday in May, the same as Mother’s Day. 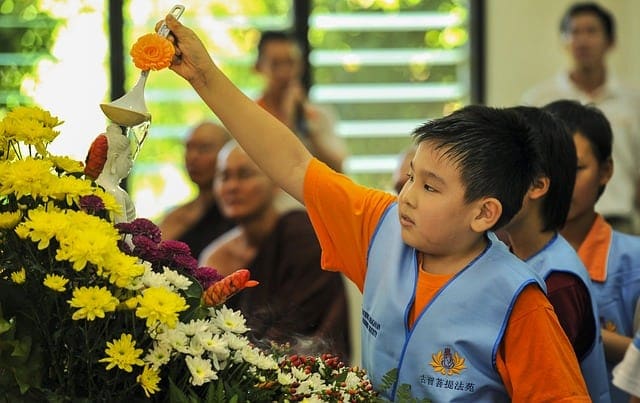 Vesak is the most important holy day in Theravada Buddhism, the main religion in Cambodia, Myanmar, Sri Lanka, and Thailand. Also called Wesak or Visakah Puja (Buddha Day), it honors the Buddha’s birth, enlightenment and death. Vesak falls on the full moon day in the month of Vaisakha (usually May or June).

On Vesak, believers rise before dawn and go to the temple. Monks lead special rituals such as raising the Buddhist flag, bathing statues of Buddha and chanting hymns. Lord Buddha taught that honoring him means to truly follow his teachings. Thus, believers aim to practice love, peace and good deeds on this day. 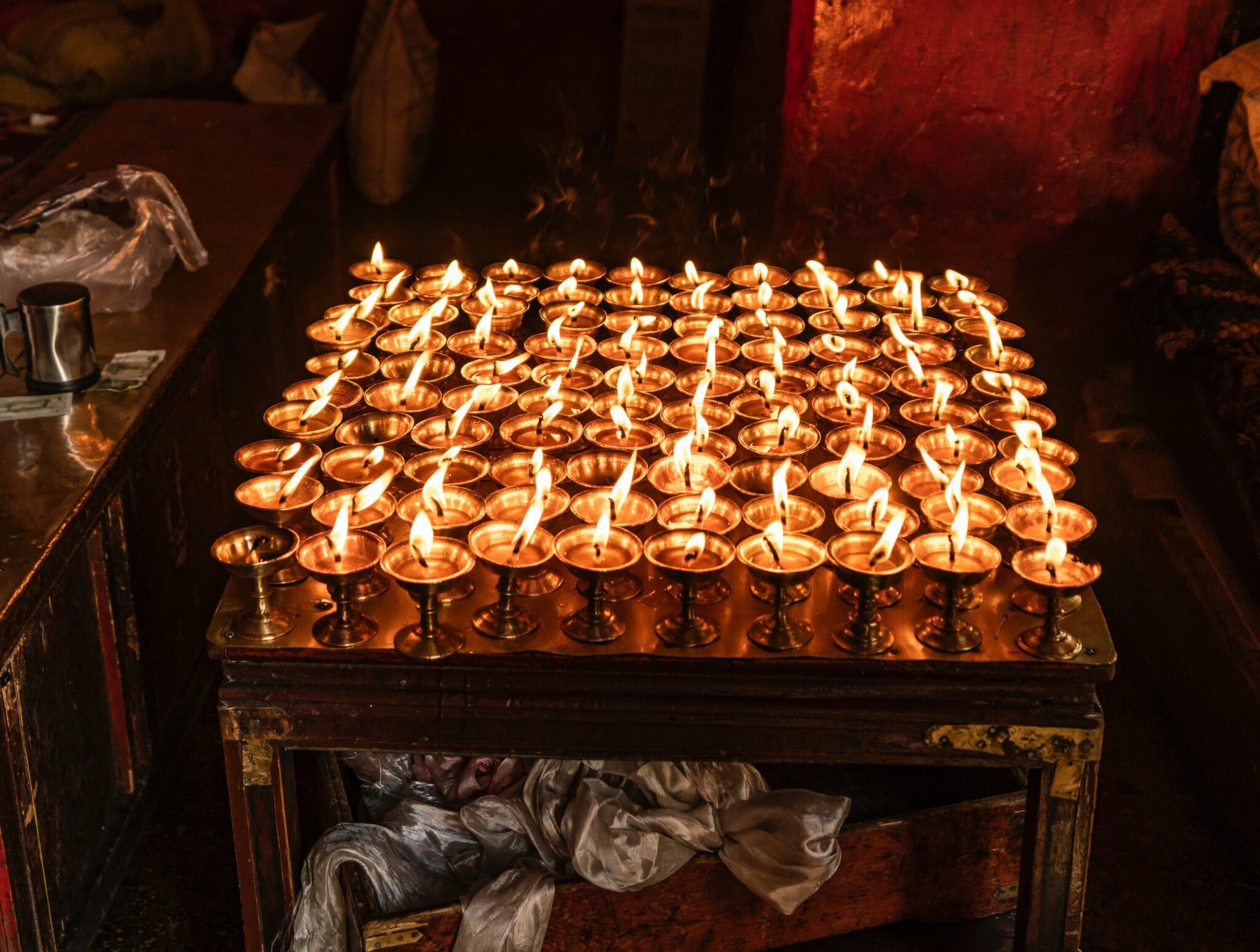 Tibetan Buddhists mark the 15th of the lunar month of Saga Dawa as the year’s most important holy day. On Saga Dawa Duchen, they commemorate the major events in Buddha’s life – his birth, enlightenment and entry into Nirvana at death. Believers observe the day by visiting temples and shrines. 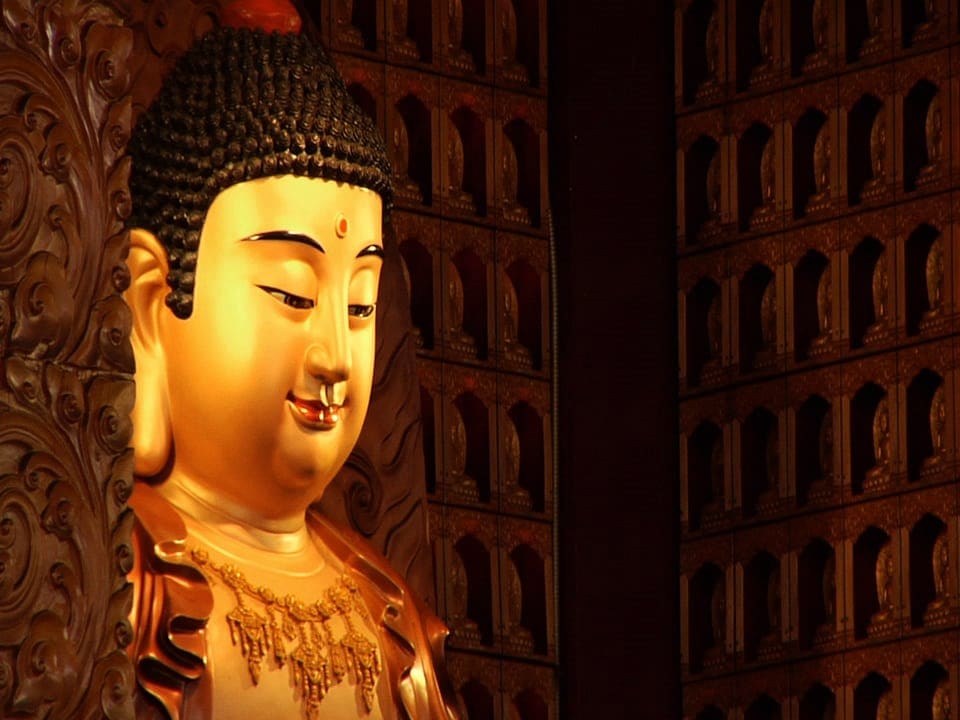 Asalha Puja, or Dharma Day, is an important holy day for Theravada Buddhists. It marks the day of Buddha’s first sermon after reaching nirvana. This sermon became the core of Buddhist teachings and included the four noble truths:

Asalha Puja marks the start of Buddhism, as the faith’s main teachings began spreading after that day,. It falls on the full moon of the eighth lunar month (Asalha), usually in July. Believers make offerings at temples, meditate and practice dharma, or righteous conduct. Monks also begin three months of retreat, called Vassa, on this day. 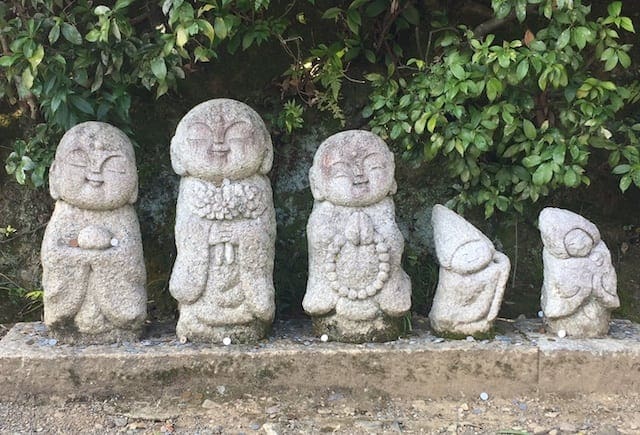 Japanese Buddhists celebrate Jizō Bon, or the Festival of Jizō (Kṣitigarbha) Bodhisattva in August. This day honors the deity who protects those in hell, animals, travelers, and children.

Jizō is one of Japan’s most loved gods. Since the end of World War II, believers have worshipped him as the guardian of “water children,” the souls of stillborn, miscarried, or aborted fetuses. According to legend, the souls of children who die before their parents cannot enter the afterlife. This is because they have not yet performed good deeds and have grieved their parents. Jizō saves these children by hiding them from demons in his robe sleeves.

Parents often pile stones and pebbles by Jizō statues in the hope of shortening their children’s time in hell. They put infants’ clothing, red hats, or bibs on the statues so he will specially protect the children. 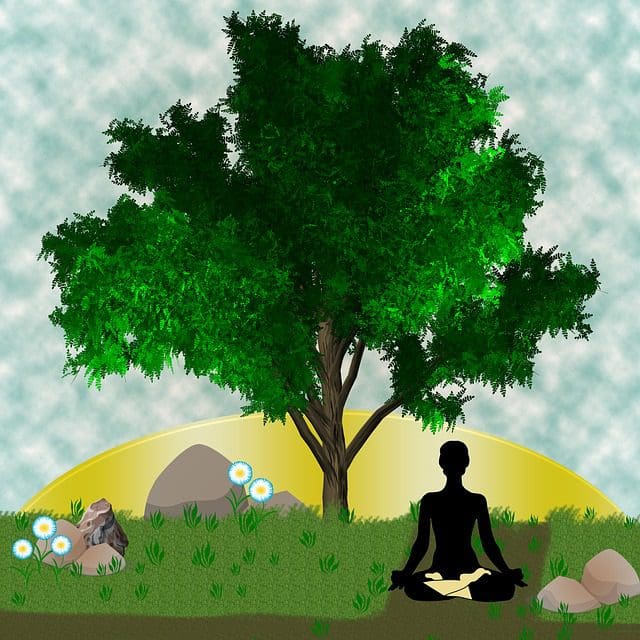 Many Buddhists celebrate the day Lord Buddha reached enlightenment. Siddhartha Gautama, an Indian prince, left royal life to seek spiritual awakening. After several years, one day he sat under a tree to meditate. He resolved not to rise until he gained enlightenment. Forty-nine days later, he finally reached nirvana, a state beyond desire and suffering. The title Buddha means “enlightened one.”

Theravada and Tibetan Buddhists celebrate this event together with Buddha’s birth and death. 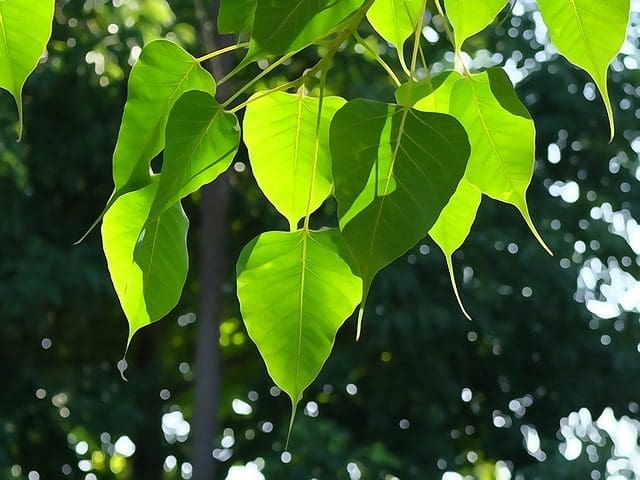 Theravada Buddhists celebrate this important holiday on the full moon day in December. It marks the date that Sanghamitta Maha Theri, daughter of King Ashoka of India, arrived in Sri Lanka to spread the Buddhist faith. The day also honors women of the faith. On this day, believers visit temples with offerings of food and gifts for the nuns and monks.

Sanghamitta brought with her the Dhamma (Buddhist teachings) and began the Bhikkuni Order in the country. She also brought a branch of the Buddha’s Bo tree. Planted at Anuradhapura in 245 BC, it’s believed to be the world’s oldest authenticated tree today.