Ahimsa and Nonviolence: An Interfaith Exploration of Racism 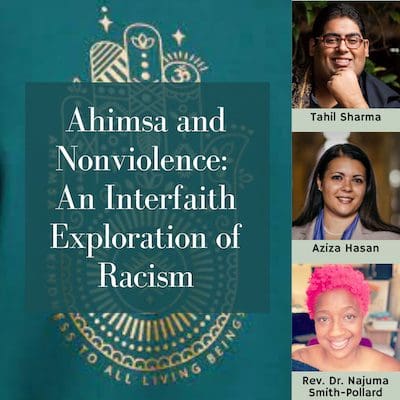 With Guibord Center Advisor Tahil Sharma and an Interfaith Panel

As part of The Guibord Center’s series on nonviolence, we look at ahimsa, the Hindu concept of recognizing all life as sacred and doing no harm. How do we embrace ahimsa and other forms of nonviolence while confronting the harm of racism within and around us?

Tahil Sharma, a Hindu and Sikh interfaith advocate, will explain more about this way of nonviolence and how it’s lived out in daily life. He will then join a panel with Aziza Hasan, Rev. Dr. Najuma Smith-Pollard, and others to explore how people of all faiths might use these principles in fighting racism and hate and working toward a more just, compassionate world.