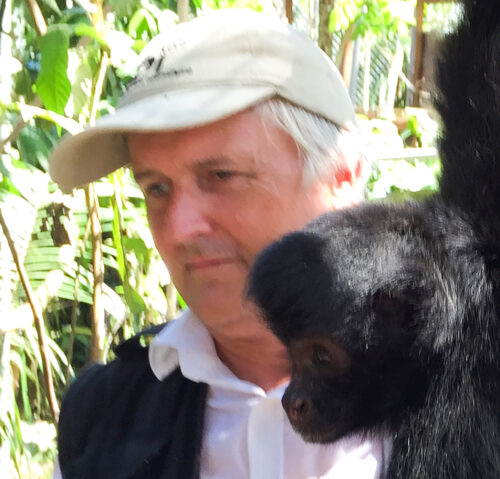 Director of the multiple-award-winning feature documentary Lion Ark, about ADI’s freeing of circus animals in Bolivia, he has produced and directed films for several animal protection groups.

Author and editor of numerous reports, Tim has worked on animal legislation addressing governments worldwide. After securing his first local animal circus ban in the early 1980s, he has played a key role in over 40 national bans on animal circuses in Europe, Asia and Latin America. Tim and Jan’s efforts secured the Convention on International Trade in Endangered Species rules on cross-border movement of live animal exhibitions (effective in over 180 countries) and the European Parliament declaration leading to Europe banning experiments on apes and wild-caught monkeys and restricting primate use. He has helped secure bans against cosmetics testing on animals in the UK, Europe and Colombia, and fur farming in the UK.

He has undertaken complex rescues and relocations of animals in the UK, US, Europe, Latin America and Africa, including huge operations to enforce circus bans in Bolivia, Colombia, Guatemala and Peru, raiding circuses and rescuing the animals – airlifting as many as 33 lions on one aircraft.