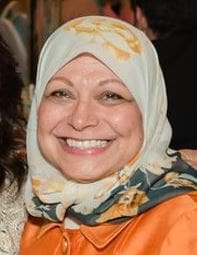 Born in Gaza, Palestine, Hedab Tarifi moved to the U.S. after the first Gulf War. She has been active in the Southern California Muslim community since 1994, working to build bridges and bring people together. Hedab served as the first female Chair of the Muslim Public Affairs Council (2007) and the Islamic Center of Southern California (2016).

In 2002, she led the effort to make a quilt in remembrance of 9/11 victims. The quilt now resides in the 9/11 Memorial Museum. Hedab was also featured in “Portrait of Hedab,” an audio diary reflecting on her experience and the Southern California Muslim community after 9/11, on KPCC, Pasadena’s NPR station. The program aired nationwide and won the Golden Mike Award for best documentary. Hedab has served on several nonprofit boards, including the New Horizon School Los Angeles. She continues working with humanitarian organizations to raise awareness of and serve suffering children in Palestine and the Middle East.

Speaker, Light in the Darkness: The Spiritual Struggle for Compassion and Justice in America Today