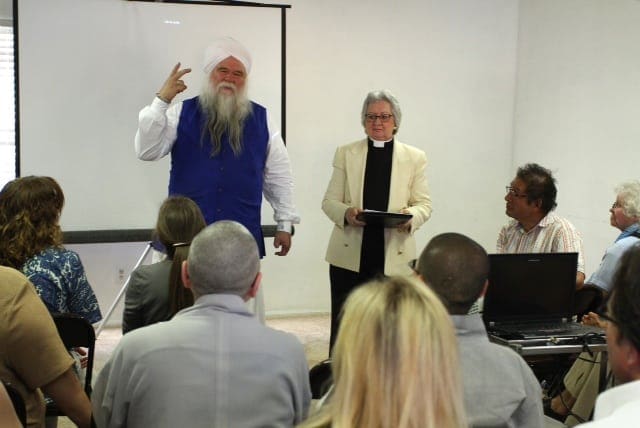 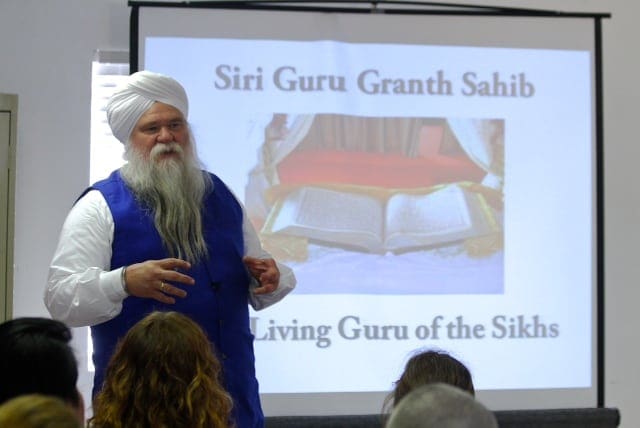 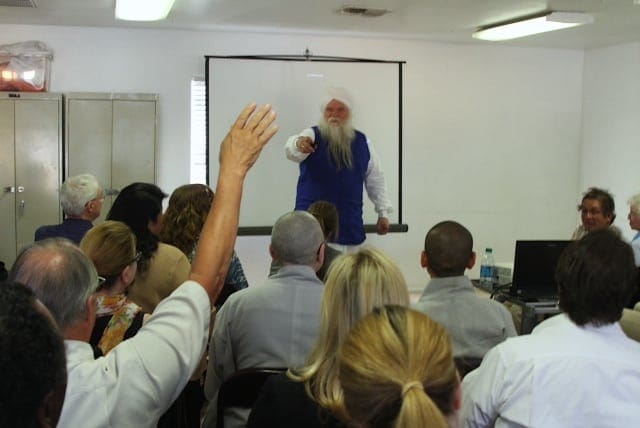 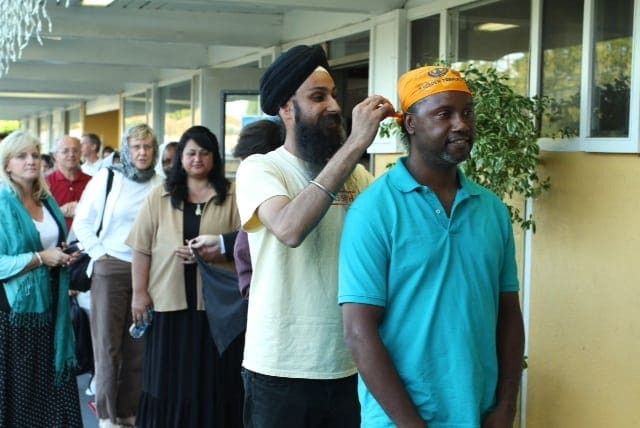 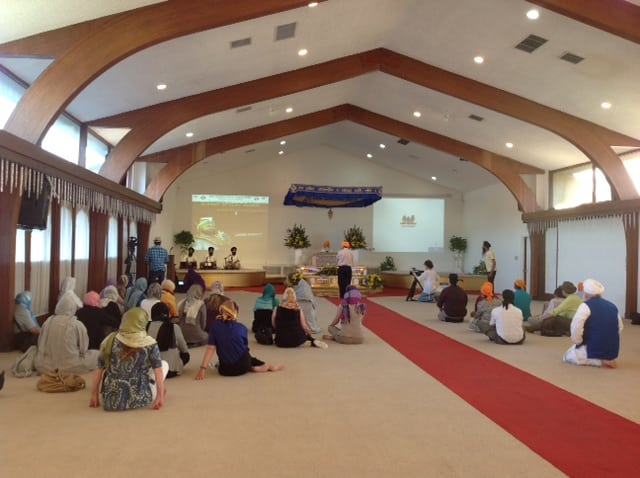 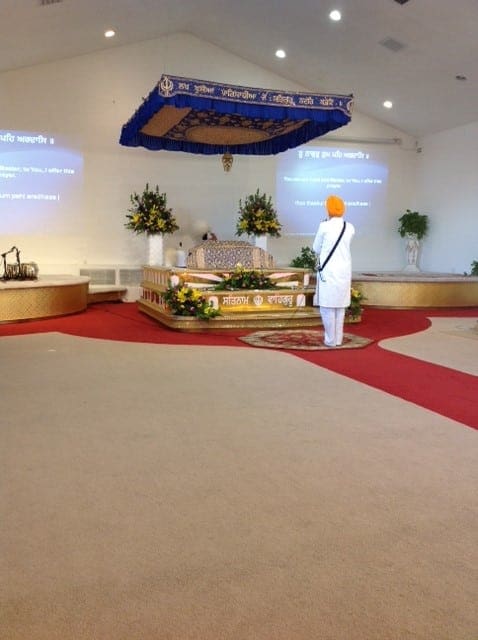 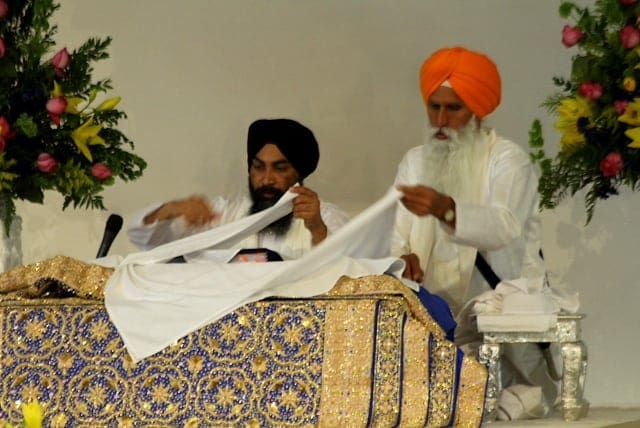 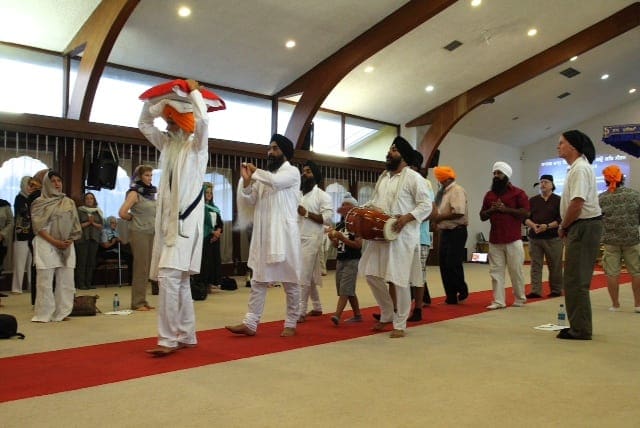 Refreshed in Body – in Mind – in Spirit

The Guibord Center – Religion Inside Out aims to help people have an experience of religion that opens up both hearts and minds. Those who attended Sikh Sacred Texts left laughing joyfully, animated, and refreshed – nourished in body, mind and spirit.

Nirinjan Singh Khalsa, an Amritdhari* Sikh, began the afternoon with everyone gathered in a small classroom at Khalsa Care Foundation to view a slideshow about Guru Granth Sahib, the sacred text of the Sikh religion. The fifth-largest religion in the world today was founded in the 15th century by Guru Nanak in the Punjab area of India and Pakistan during a time of great injustice of the caste system.

Nirinjan began his talk by saying that he hungered to hear the things we wanted to know about Sikhism. He offered a true exchange and a rare opportunity to learn about these people of deep integrity and courage who lives are formed in their relationship with their living Guru: Guru Granth Sahib.

Unlike the Bible, the Torah, the Bhagavad Gita, or other sacred texts, the Guru Granth Sahib is not a history or even a story.  Rather, it is “a compilation of the devotional writings, poetry and hymns of seven of the Sikh Gurus and of Sikh, Sufi, Hindu and Muslim saints and sages.”

This collection of chanted teachings is carefully pieced together to function like a tuning fork to restore the harmony of the listener by orienting one ever towards The Holy. The text is not worshiped as an idol. Instead, it is fully engaged as a Living Guru. Followers revere and experience the Guru Granth Sahib as a means of attuning with God through being with the Holy Text.

The audience asked many thoughtful questions, and participants learned about the trappings and traditions of Sikhs. They also experienced Sikhs’ integrity as Nirinjan exemplified how they live out their faith.

Following the classroom learning, all were invited to shed shoes and don head coverings in order to enter the sacred space of the gurdwara to experience being in the presence of the Guru Granth Sahib. Once settled and sitting on the floor, with men on one side and women on the other, our group began to relax into the rhythmic chanting.

In the front of the room, on a raised throne-like platform (Palki), was a richly decorated dark blue cloth that covered the Guru. A turbaned man holding a large white Chori sab waved it respectfully over the Sacred Text.

The words being chanted were of the Sufi saint Kabir and were projected in English and Gurmukhi on either side.

“First, Allah created the Light; then, by His Creative Power, He made all mortal beings.”

“The clay is the same, but the Fashioner has fashioned it in various ways.”

As one allowed oneself to sink gently into the chanting, into the thoughts of God, slowly the inner chatter of the day that clutters the mind began to recede. Breathing slowed. Peace slipped in where tension dwells. We sat and began gradually to let go of those things that distract and disturb our focus from the Eternal. We truly entered into sacred space.

After a time, there was a shift – an announcement of the coming ceremony of preparing and putting the Guru to rest at the day’s end.  We rose and then sat to receive a mouthful of sweet dessert. Then we rose again to stand witness to the deeply respectful, ritually choreographed wrapping of the Holy Text in layers of silk for the evening’s repose.

Once the initial ritual was complete, the Guru Granth Sabih was escorted in procession back into the room prepared for it and placed in bed for the night.

We were invited to peek into the room before we moved to partake of the generous meal (langar) prepared by our Sikh hosts. As they served us, our hosts also engaged in conversation that grew deeper as the evening advanced. Children eagerly helped their parents and then slipped into seats to listen to the conversations going on around them.

Earlier in the classroom, Nirinjan spoke of the terrible wave of bigotry and violence unleashed since 9/11 upon Sikh communities in the United States. Men, women and even children have continued to be subjected to hatred, suspicion and brutality simply for wearing the outward symbols of their faith while living as productive, peace-loving Americans. Tragically, many Sikhs in America have had to choose between following their faith or shaving their beards and cutting their hair to be able to find work and support their families. As the evening came to a close, one of the participants shared, “Ever since 9/11, whenever I’ve seen someone with a turban, I’ve always stepped back. After tonight, I’ll step forward.”

*Amritdhari Sikhs are individuals who have gone through the Amrit Sanskar initiation ceremony and belong to the Khalsa. They wear the five Ks, pay daswandh and follow the other rules of the Rahit Maryada, the Sikh code of conduct. 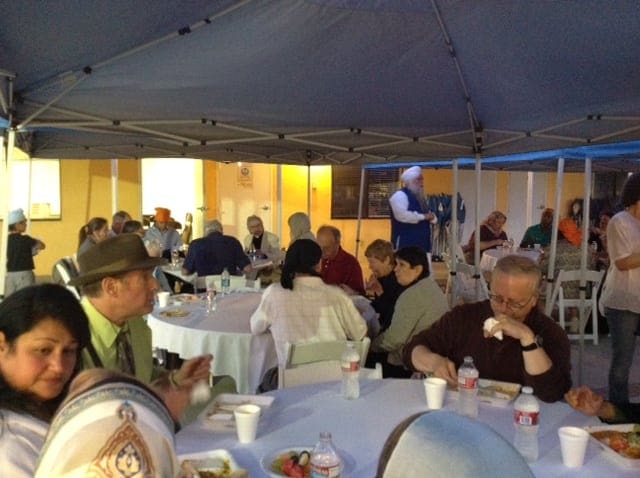 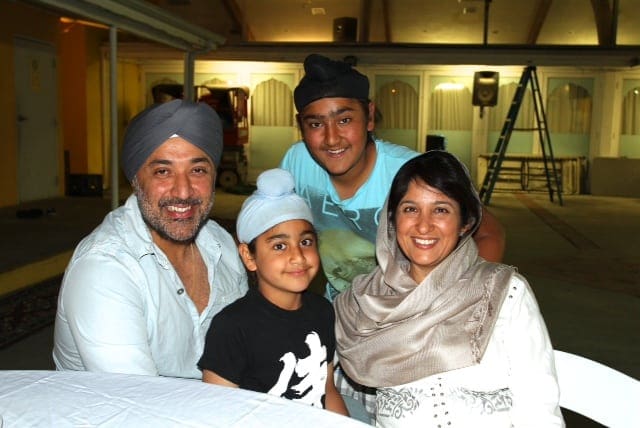 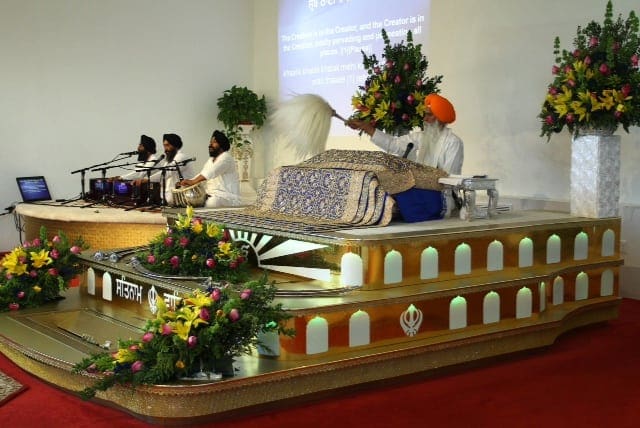 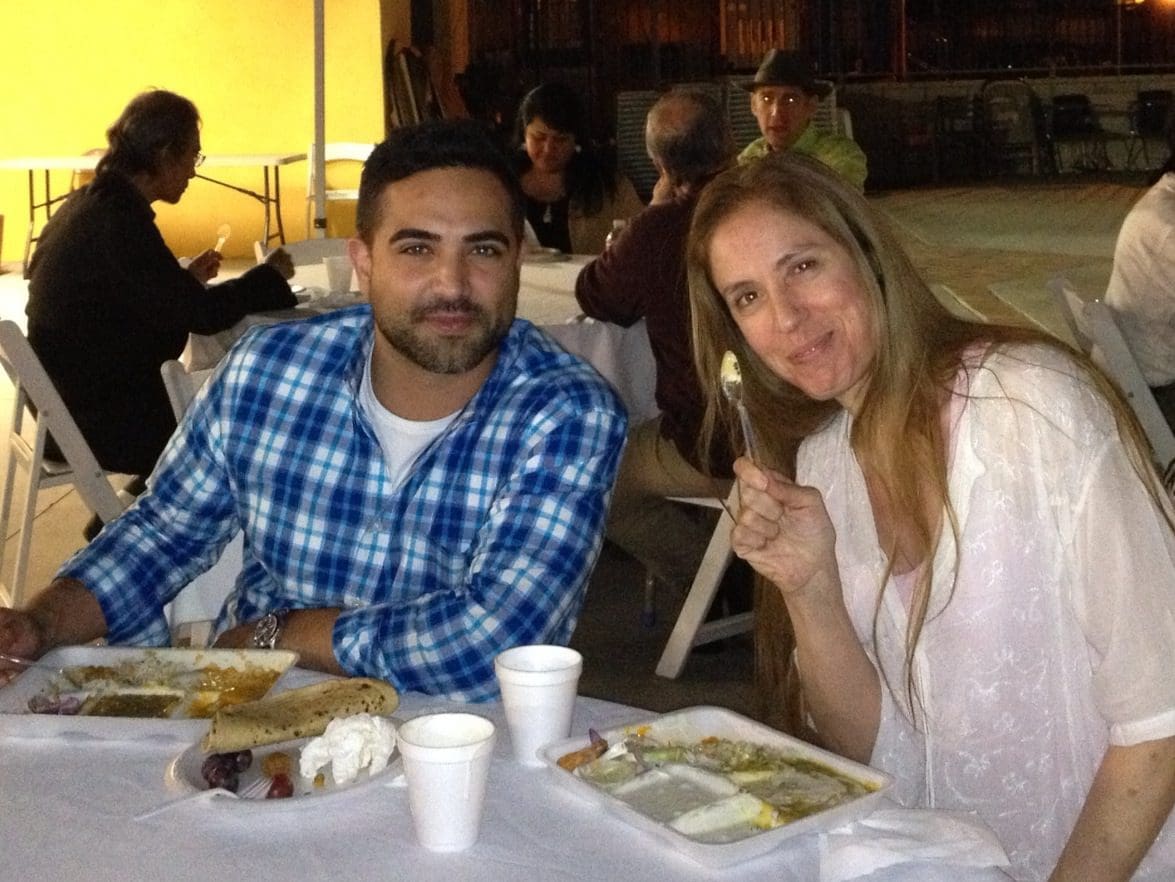 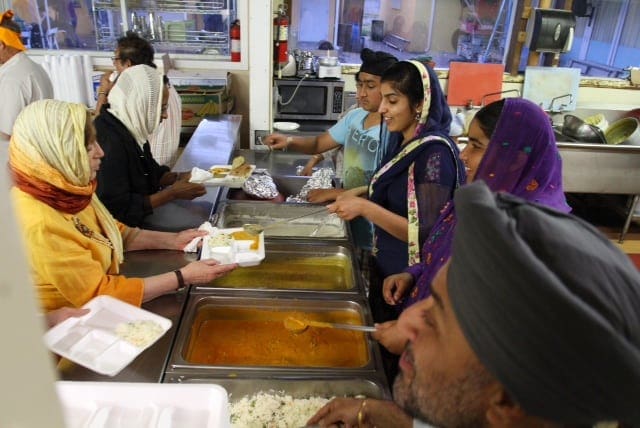 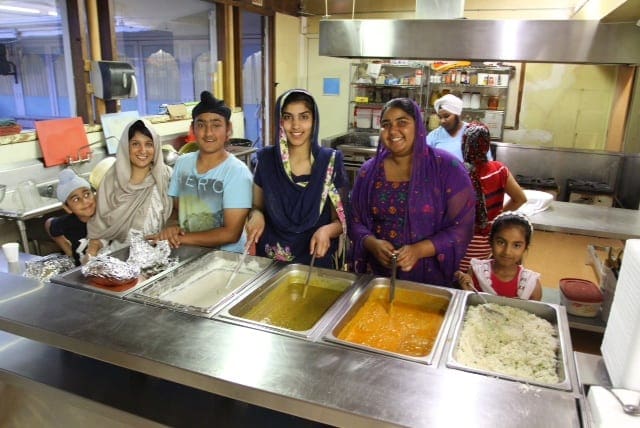 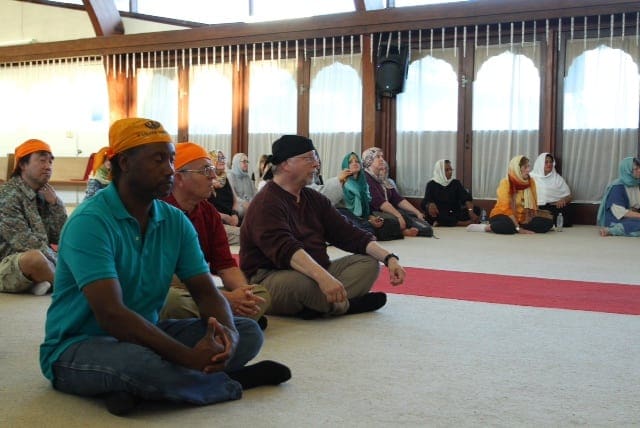 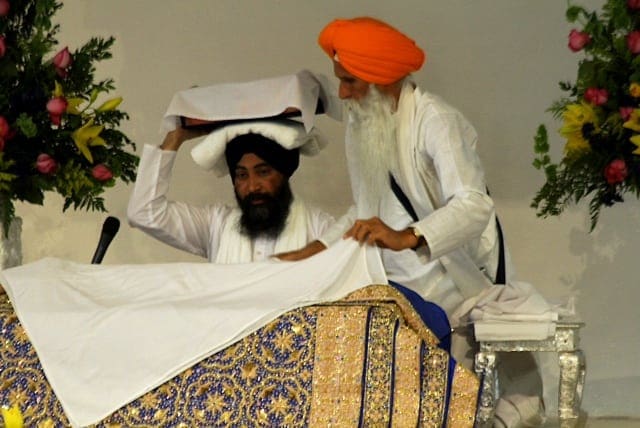