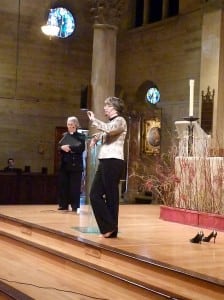 Dr. Amy-Jill Levine turned religion inside out with her graciousness and delightful humor for those gathered at the first lecture presented by The Guibord Center on March 27, 2011.

“In order to understand Jesus fully, we need to have a sense of how the people who first heard him understood him, which means we need to know how his words sounded to First Century Jewish ears. If we get the context wrong, we’ll get him wrong.”

The perspective she then offered provided those present with an opportunity to experience Jesus, his piety, prayers and parables in a fresh and exciting way.

Ten Points to Consider about the “Jewish Jesus”

Amy-Jill Levine, The Misunderstood Jew: The Church and the Scandal of the Jewish Jesus (San Francisco: HarperOne, 2006).