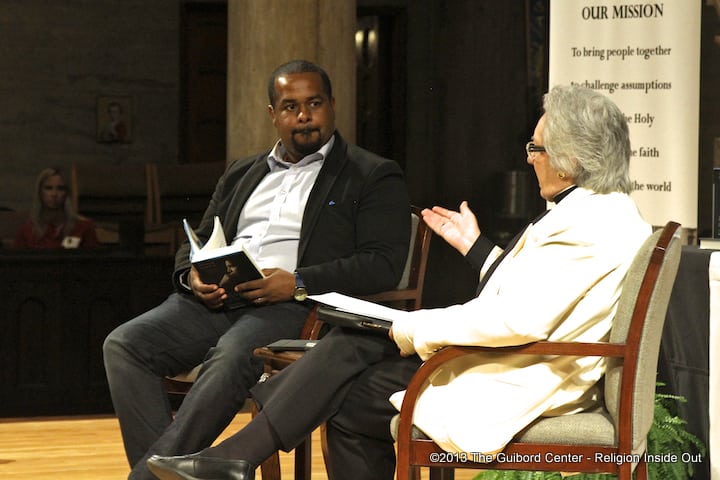 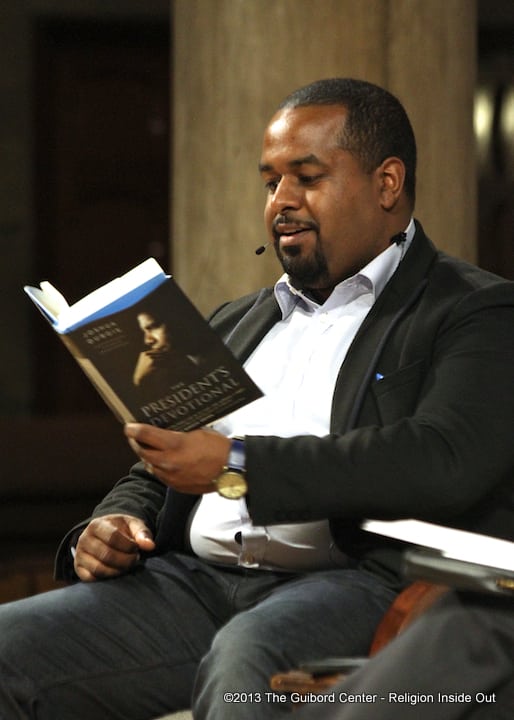 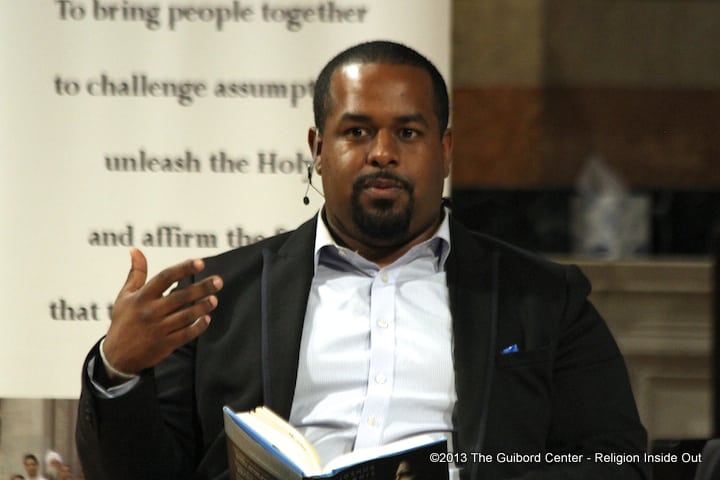 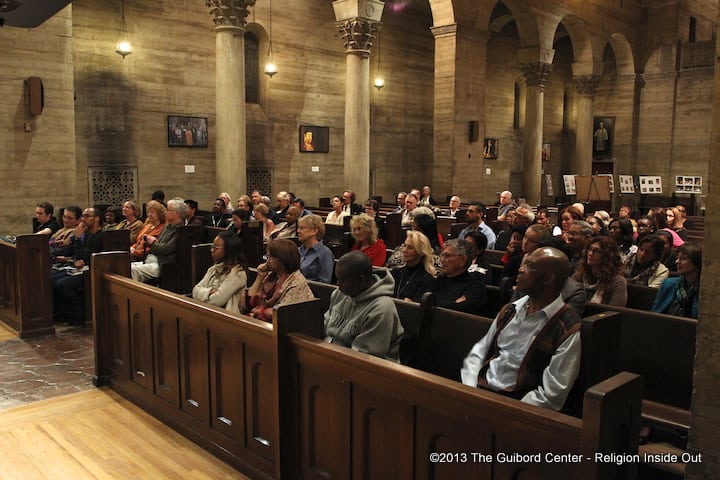 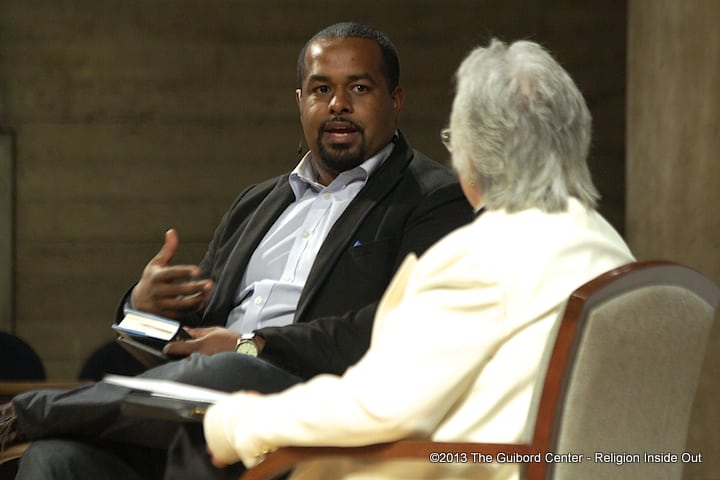 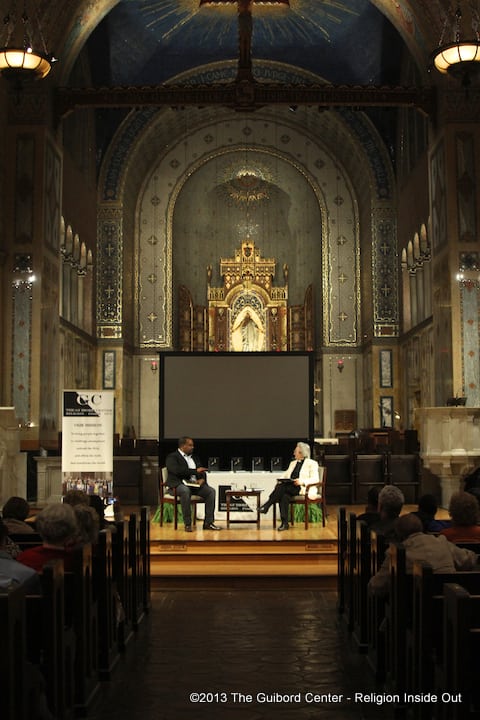 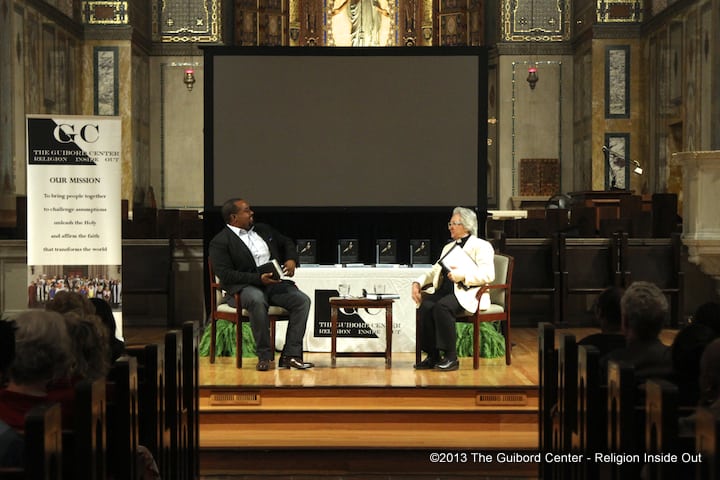 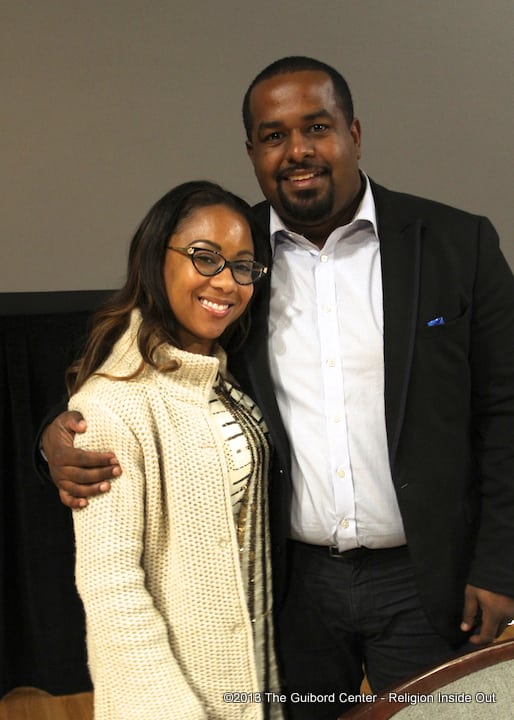 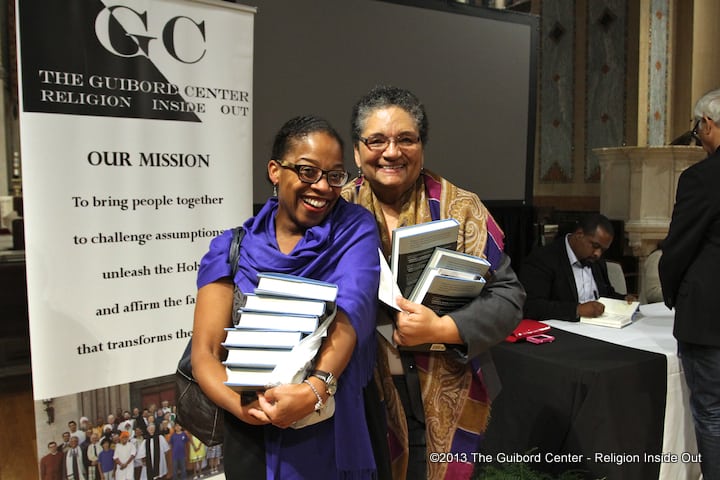 An Intimate Conversation Between the President’s ‘Pastor-in-Chief’ Joshua DuBois and the Rev. Dr. Gwynne Guibord

People arrived harried and exhausted, a few at a time, grateful to finally escape the chaos of red lights and the paralyzing gridlock of Los Angeles’ traffic at its worst. Stepping into the Cathedral, they entered into a world of sacred space, of eternal values, a quiet place of peace and warmth and welcome. Deep hospitality awaited them and a beauty unimagined just outside.

The evening began late – a first for a Guibord Center event – with even the guest speaker detained in the tangle of traffic, but no one objected, not the friends who had come early for a special reception, or the many interfaith leaders eager to meet this man of faith, or those who found themselves part of a growing community of attendees. No one objected because of the kindness of those who met them and the strong presence of peace within the space itself.

It is this very sense of profound welcome and deep sustenance that Joshua DuBois sought to create with his daily devotionals for a young senator who then became president – an island of calm in the midst of chaos, a place of restoration and inspiration and clarity in the eternal presence of the Holy.

The evening’s conversation and book signing by Joshua DuBois, author ofThe President’s Devotional and former Director of the Office of Faith-Based Initiatives, and the Rev. Dr. Gwynne Guibord, founder of The Guibord Center –Religion Inside Out, began with a brief introduction of The Guibord Center’s interfaith efforts and quickly moved to deeply personal, private stories of people of faith who hold power in this country.

The chemistry between Gwynne and Joshua was immediate and delightful. Their exchanges were filled with gentle humor and thoughtful responses delivered with candor and humility. Clearly Gwynne had done her homework well. Her introduction and the questions that followed led the way into the stories that the audience had hoped to hear. Bit by bit, those gathered relaxed and inched forward becoming like friends tucked around a family fireplace listening to a cherished guest.

Joshua instantly brought a chuckle with his opening admission that he had written the second volume of (The President’s Devotional) while stuck on the freeway! Before he even started, he introduced Michelle, his wonderful wife of precisely 67 days!

Gwynne asked him about interfaith work throughout the evening and he applauded the very practical and highly successful work of The Guibord Center that is really connecting people to one another, something he sees that people in this country are hungering for. He shared the White House’s historic recognition of the many faiths that are a part of this nation and have been present at the White House and the many service projects run out of the Office of Faith-based Initiatives.

Gwynne gently guided him inward as she did often by quietly setting the scene and then asking him to “take us all back to July 27, 2004. You are having a burger and fries – good man – at the Hawk and Dove … then you heard this young Illinois senator talking. And you were drawn to him immediately. Why? What happened to you?”

And so the stories began. A young man at a crossroads of his life… wrapping up graduate school … “my faith was and is centrally important to me … really trying to grappling with which way to go … I didn’t find many leaders in my party who … spoke from their values … I didn’t know if there was a home for me … and then…

“I saw this man … with an odd name, Barack Obama… a state senator – – giving quite a speech. … … about patriotism and love of country…  but then he started talking about values, and said the line I won’t ever forget: ‘that we serve an awesome God in the blue states.’ And I thought, “Yes, we do!”

The audience was nodding with him remembering their own excitement about this new candidate who brought such fresh hope.

Joshua spoke of how Barack Obama’s message resonated with him and how he “hounded” his office until he finally got an interview.

He felt called “… to support the good work that [Senator Obama] was seeking to do for our country.”

And so their journey together began. An amazing journey of the tough decisions on the Campaign Trail where a fresh, young speech-writer learned from his boss that “spin” is never an option when the going gets tough. It was a journey of the wonderful scene of the Reverend Billy Graham praying for the President and the President praying for the evangelist at Rev. Graham’s home on the top of the mountain, and of the awful abyss in the agony of Sandy Hook. Along the way there was the authenticity of a man who is truly “no Drama Obama” – except, as we learned, at his daughter’s basketball games. Joshua told the sweet story of a senator who upon hearing of Joshua’s biological father’s death called him in and shared his own struggle with losing the father he had barely known.

Gwynne’s first personal question had been deeply intuitive. There was clearly something special, something fortuitous, that had drawn Joshua DuBois to create a place of spiritual respite for this man with the odd name and the deep abiding spirit.

That special guiding force brought them together in a mutuality of faith at a time when nothing else but faith and decency would have allowed them to survive.

The most moving portrayal of President Obama in Joshua’s book came for Gwynne amid the tragedy of the shootings at Sandy Hook, an incident that brought this country to its knees. At one point in the middle of the evening she took a deep breath and turned to ask Joshua if he would be willing to read the entire section. He agreed.

The energy in the Cathedral shifted. A hush descended as he began revealing the events of that terrible day that broke the heart of this great nation. His poetic retelling touched such a private place of raw tenderness that those gathered were joined in an intimacy of excruciating poignancy following a man who knew his task was to stand as symbol of all the grief throughout the land to comfort those who could never be comforted for a loss beyond measure. We journeyed on his words through the brokenness of the day, through the determination to provide a presence, a compassion, a witness to that which should never be. We traveled with him to Sandy Hook, to a dozen classrooms and families – mothers and fathers, sisters and brothers, grandparents, and cousins and nieces and nephews,.. all seeking shelter, seeking someone to ask about their special, unique, irreplaceable child, to shoulder their grief, to see their tears, to pray their prayers. We stood with him as he witnessed at once a President and a father who knew what he had to do to care for his people and did it, over and over and over again, moving from family to family at their speed not his, quietly, privately, humbly.

There were other questions about The President’s Devotional, about it being written by a Christian for a Christian. Were there not times when Joshua might have wanted to look to another faith tradition as well? After acknowledging the richness of other faith traditions, he explained:  “I wrote The President’s Devotionals … to help this president who happens to be a Christian to cultivate and deepen his relationship with God and with Jesus.” Who could have imagined how important such a spiritual gift would become.

Gwynne’s thoughtful questions on the structure of The President’s Devotionals revealed profoundly important insight into Joshua’s beliefs about Scripture and the Word of God as it is amplified throughout the world. “This guy really knows text!” she exclaimed joyfully at one point.

A moment later she laughed turning to the audience. “These really are wonderful. I am eager for you to read them.” [Apparently the audience listened, for every book was sold out before the night was over.]

There were other stories about the President’s deep respect for his elders in the civil rights movement, for people of faith and good will, about balance and clarity and a dedication to doing the right thing, and even about respect for the views of others who disagree.

The mission of The Guibord Center is to bring people together to challenge assumptions, to unleash the Holy, and affirm the faith that transforms the world.

There in an island of quiet respectfulness people gathered to listen to a young man who felt called to offer a colleague spiritual sustenance for good times and bad. His task complete, he now turns to offer the same sustenance to any who see its merit.

Certainly by the end of the evening there was no one who had not been touched by by the place where of the visions of Joshua DuBois and Rev. Dr. Gwynne Guibord met, a place where holiness and faith are shared with all. 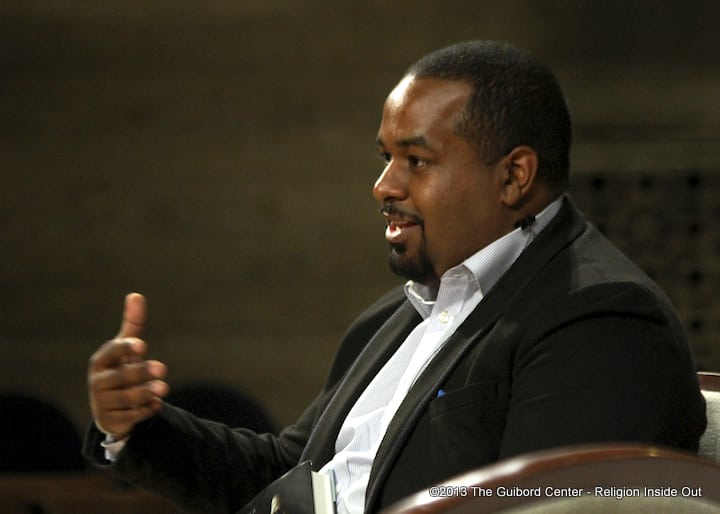 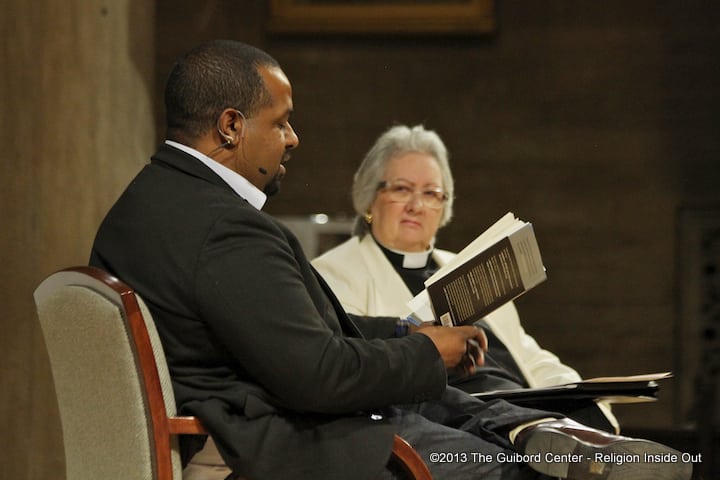 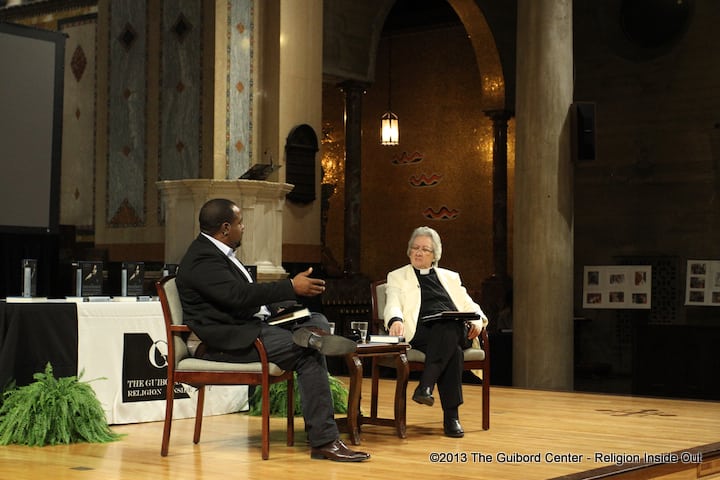 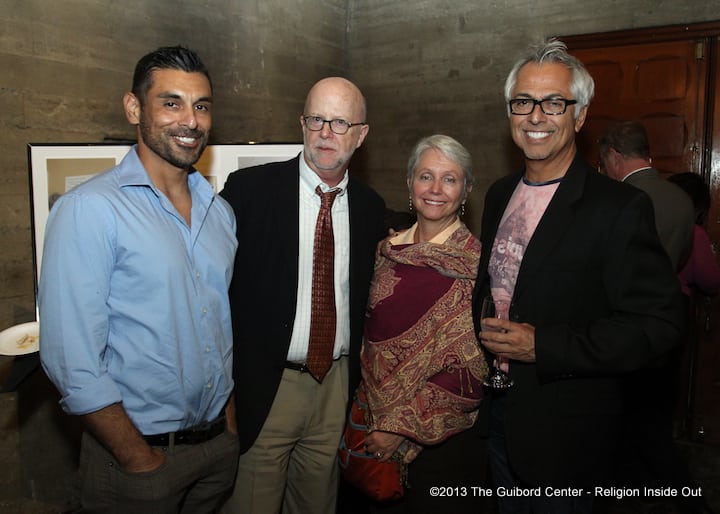 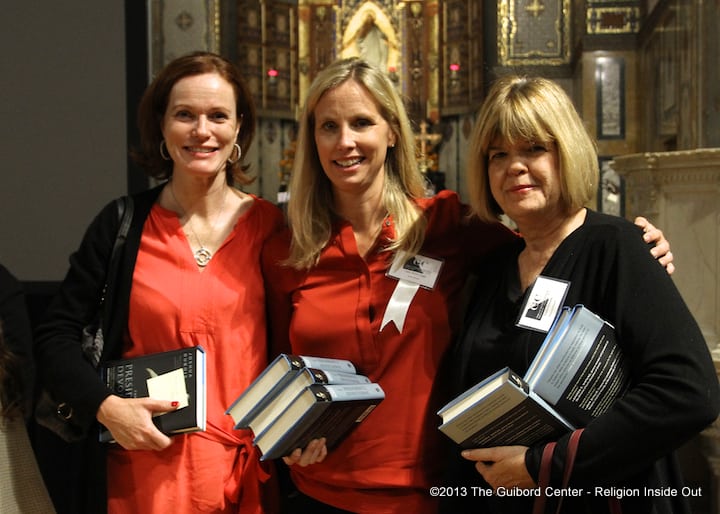 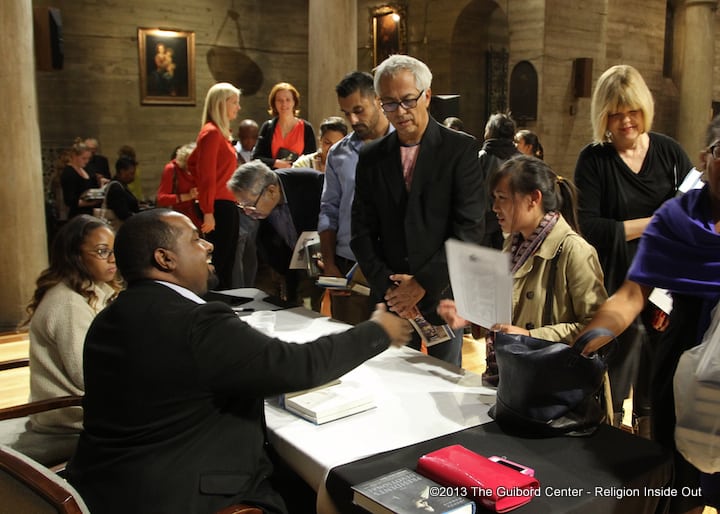 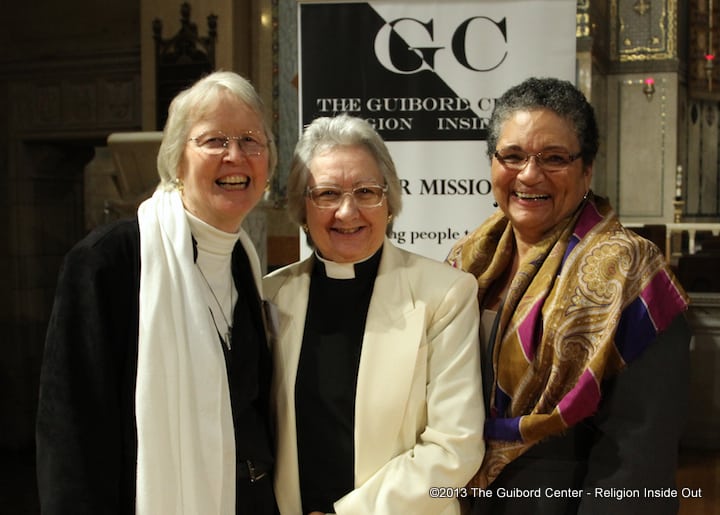 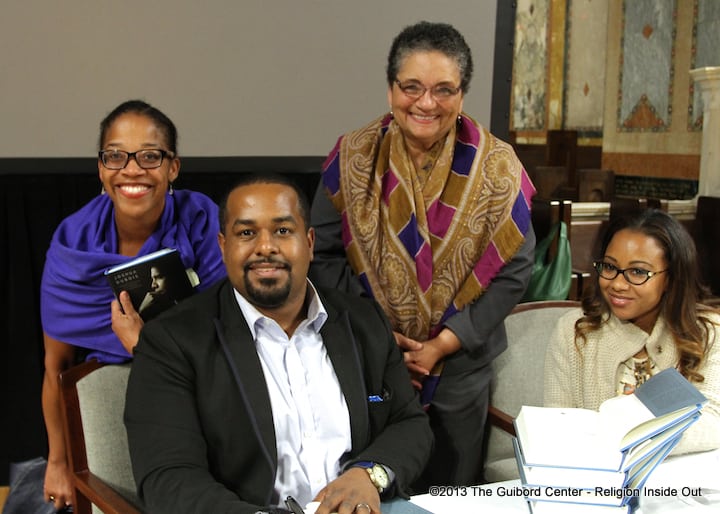 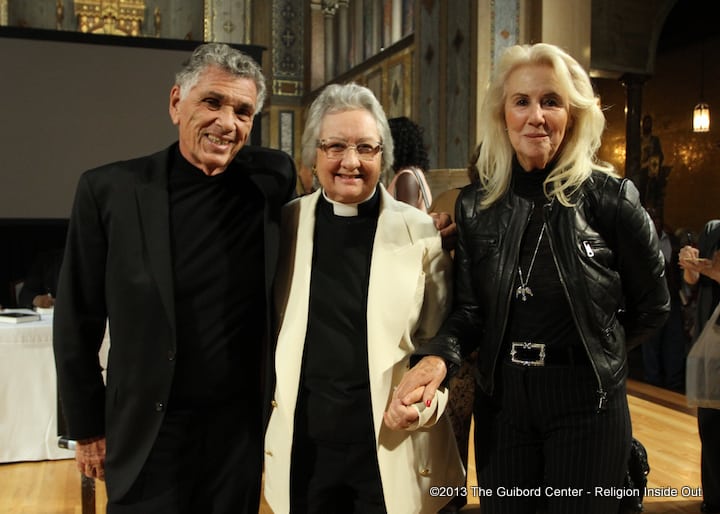 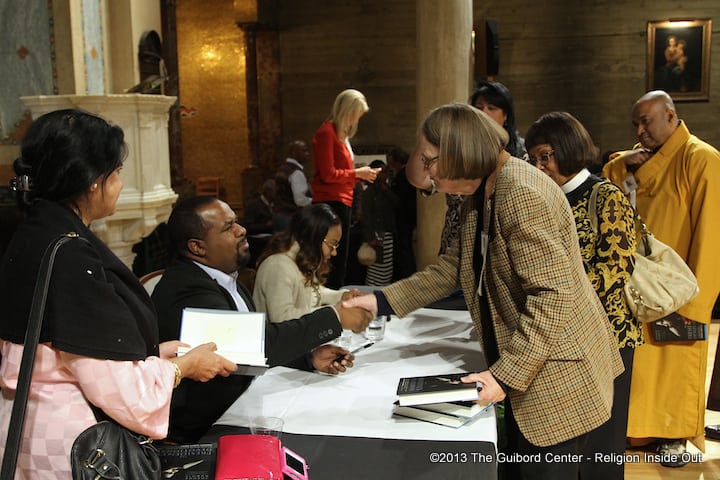 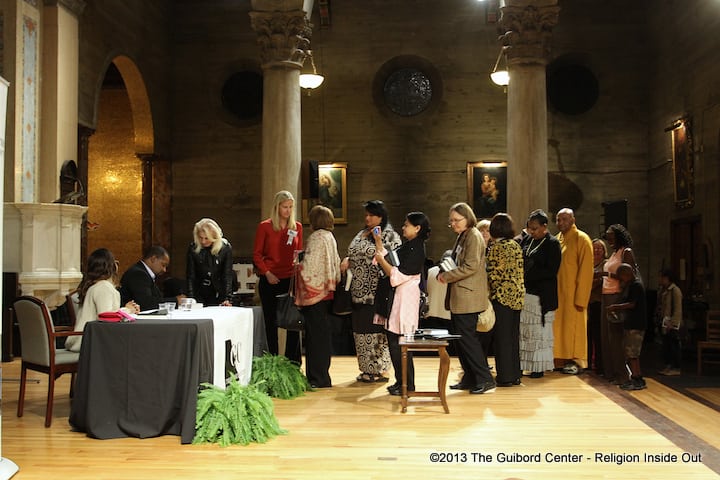 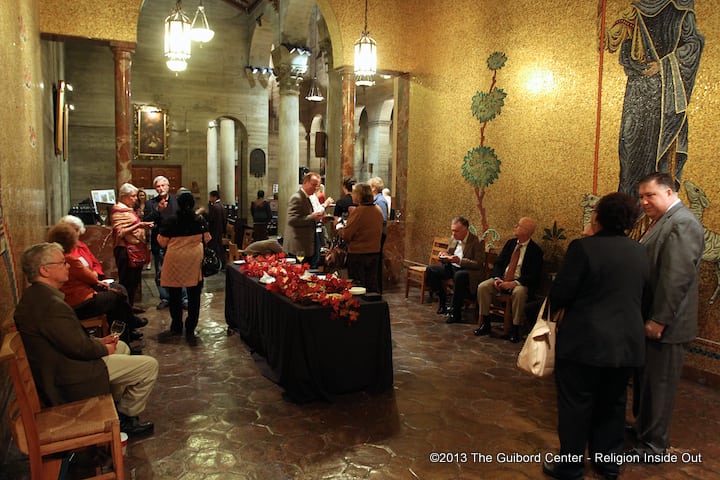 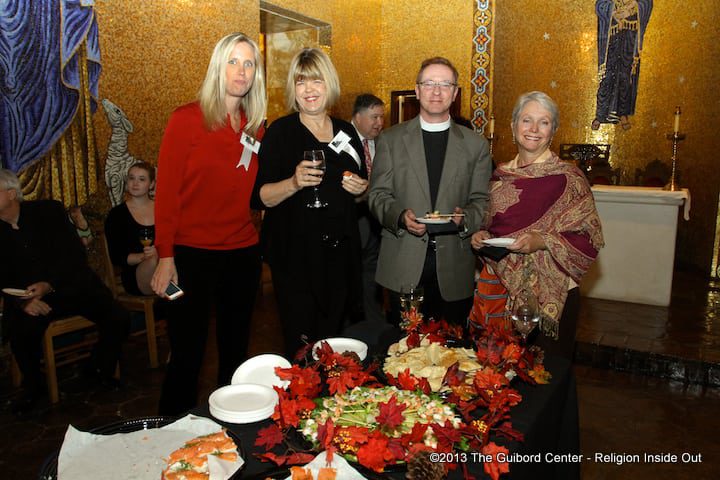 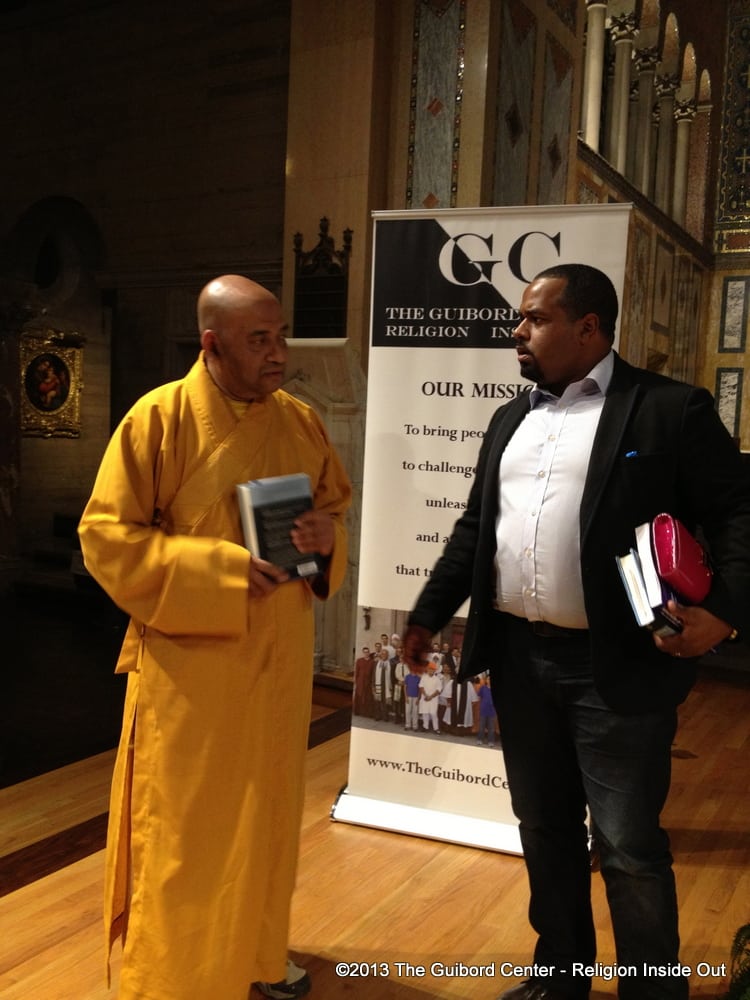 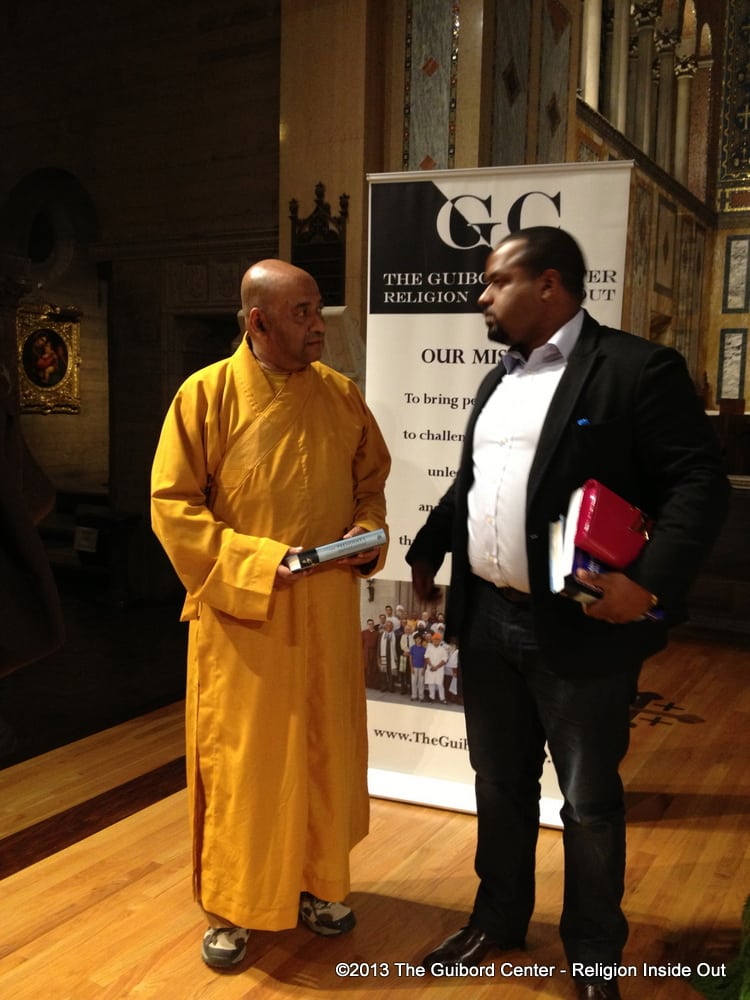