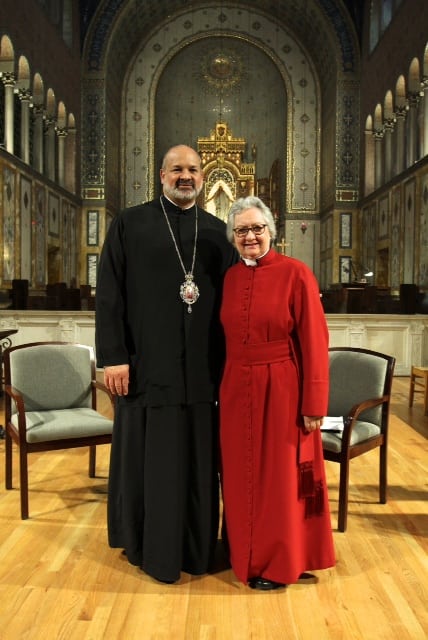 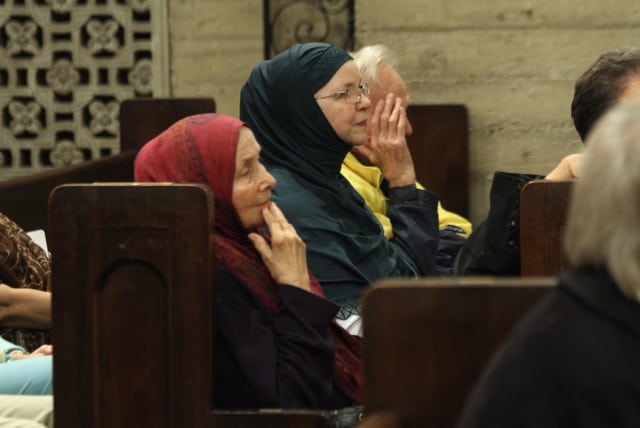 Ancient Wisdom for a Contemporary World:
A Conversation with His Grace, Bishop Demetrios

His Grace, Bishop Demetrios of Moskissos, Greek Orthodox Metropolis of Chicago, stands taller than most men. He is an imposing figure who could be enormously intimidating – except for the sparkle in his eyes and the smile that lights up his face when he interacts with people. Instead of looking down on others, which he could easily do, at every opportunity he lifts them up. One soon realizes that this comes easily for someone who lives the belief that each person is made in the image and likeness of God and is therefore entitled to the deepest respect in every interaction.

Following a warm introduction by Rev. Dr. Guibord, His Grace began with a brief, informative description of the Orthodox Christian Church and how it compares with other Christian Churches. It is the Roman Catholic Church to which it is most similar in form including the seven sacraments he pointed out but then added: The underlying and crucial difference between the Roman tradition and the Orthodox does not come about in terms of what we visibly are, but how we are and how we understand the life of Christ… our theoria or “vision” of the Church and our life within it.”

The meaning of that profound difference in vision between “eastern” and “western” views of Christianity began to become clear in the rich exchange brought forth by Rev. Guibord’s illuminating questions. Before beginning the conversation, however, Rev. Guibord took a moment to recognize the generous and joyful presence of Fr. John Bakas, Dean of St. Sophia’s Greek Orthodox Cathedral in Los Angeles.

Rev. Guibord began the conversation right in the Heart of Greek Orthodoxy with her opening question about “the image of God that dwells within each person”. His Grace responded: “…If Humanity is created in this image, the Image of Christ, then every person is of infinite value and worth because they are a person…All life is sacred because it is Life. The Orthodox position: the sanctity of life … goes from womb to tomb. So all life is sacred… (not) because of what someone does or does not do – (that) doesn’t make someone sacred – they are sacred because they are made in the image of God. PERIOD!” This central “vision” lay at the heart of almost every response whether about the Death Penalty and His Grace’s bold and courageous fight to end it in his home state of Illinois or his response to the AIDS crisis by creating the first task force with the Greek Orthodox Church in America that has become a national model.

In Eastern Orthodox theology all relationship goes directly back to the Trinity which in this view is relational: “the Father, Son and Holy Spirit bound up in a relationship of Love so much so that God has One essence..” That focus is vastly different from the emphasis that Western Christianity places on the Trinity. His Grace continued: “If we are created in this image, we too are imbued with that sense of value, that sense of worth… I know I am a person in community with other persons just like God is a community of persons. So I know that I exist because I see you… because we look at each other.”

It is this sense of bringing loving presence to any interaction with “the Other” that became most noticeable in the presence of His Grace, Bishop Demetrios. Not only did he refer to the lengthy heritage of great Greek Orthodox leaders throughout history who have worked valiantly to uphold the basic dignity and rights of all people, he modeled it throughout the afternoon with the dignity and thoughtfulness he brought to each response and new encounter.

He spoke about the difference between human justice and righteousness, the prior being fairness but the latter being what God calls us to do in striving to uphold human dignity at all times. He told stories and laughed easily and at the same time addressed tough issues including fanaticism with candor.

He talked about fear of “the Other” leading to fanaticism in every tradition, including Christian ones, and the importance of that fear being met with conversation and new understanding of one another. He shared the remarkable efforts of the Ecumenical Patriarchy in Constantinople to reach out to the leaders of Christian and other faith traditions in very significant ways noting that the Greek Orthodox Church is in a unique position to bridge the cultural West and Islam having lived for 400 years under the Ottoman yoke. “We understand the mindset. We are Eastern in our approach – very different from the cultural West which is more scholastic in its approach. Image and likeness theology takes a central role for us… something we see in the cultural East, in Islam and Orthodoxy.”

Rev. Guibord asked the wonderful question important to many gathered about the teachings and practices that nourish his own personal spiritual life to which he replied with a delightful and profound description of the difference between chronos chronological (clock) time and kairos, God’s Time, sanctified time beyond time and space. “When we enter into our churches which are icons of the universe, we leave chronos behind and move into kairos. Liturgical tradition is other worldly, is focused on the Kingdom of God realized but not yet.”

He shared a beautiful prayer used during the season of Lent. As he struggled for the words, Fr. Bakas rose from the front pew and offered up the tattered copy out of his own pocket. He also described some of the transformational liturgies of the season.

Later he addressed the very popular Jesus Prayer or Prayer of the Heart.

The time shared passed far too quickly. It was surely an experience of meeting the Holy. Much of what transpired is captured here on film. When the formal conversation ended, we moved into hospitality and fellowship. A beautiful classical solemn evensong liturgy presented by St. John’s clergy and St. John’s choir followed. His Grace preached. The film of that liturgy and written text of His Grace’s sermon are also available on this website.