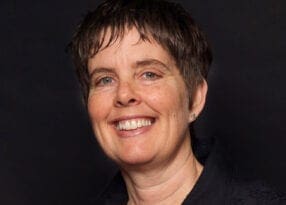 Christine Stark is an award-winning writer, researcher, visual artist, and international speaker with Anishinaabe and Cherokee ancestry. Her cultural and spiritual roots infuse her creative, nonfiction, and academic writing, much of which focuses on Native women, trafficking, and sexual abuse. Christine’s writing has appeared in numerous publications including the University of Pennsylvania Law Review; Dignity Journal; The WIP; Florida Review; and The Chalk Circle: Intercultural Prize-Winning Essays. Her first novel, Nickels: A Tale of Dissociation, was a Lambda Literary Finalist and she has been nominated twice for a Pushcart Prize.

A co-editor of studies including Not for Sale: Feminists Resisting Prostitution and Pornography, Christine is a co-author of the groundbreaking research “Garden of Truth: The Prostitution and Trafficking of Native Women in Minnesota.” She has taught college writing and humanities classes for 18 years. In 2012 she was named a “Changemaker” by the Women’s Press and was a Loft Series Mentor Finalist, and the International Leadership Institute honored her with its 2019 International Social Justice Citizen Award. Learn more at www.christinestark.com.