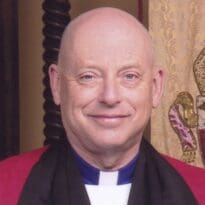 The Right Reverend John Harvey Taylor began ministry as seventh bishop of the six-county Episcopal Diocese of Los Angeles on Dec. 1, 2017. He invites the diocese’s 65,000 parishioners, 400 clergy, 130 congregations, 30 schools, and affiliated social-service agencies to join him in the mission of “feeding hungry hearts.”

A lifelong Episcopalian, Bishop Taylor previously had served since 2004 as vicar of St. John Chrysostom Church and School in Rancho Santa Margarita, Calif. Chief of staff to former President Richard M. Nixon from 1984 to 1990, he was thereafter executive director of the Nixon Library in Yorba Linda, Calif. He holds a bachelor’s degree in political science from the University of California, San Diego, and a master of divinity from the Claremont School of Theology and Bloy House.