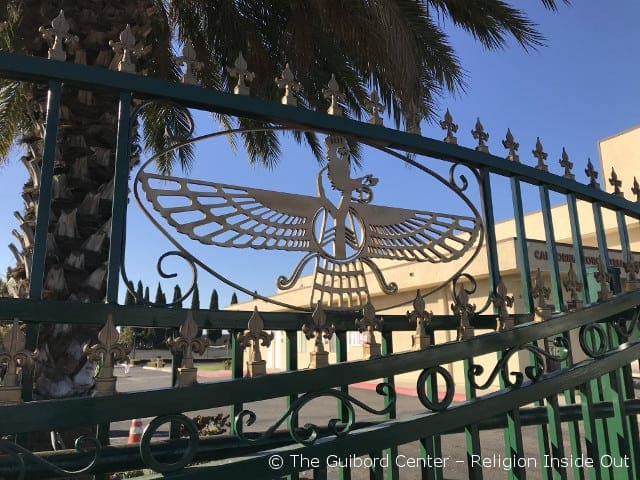 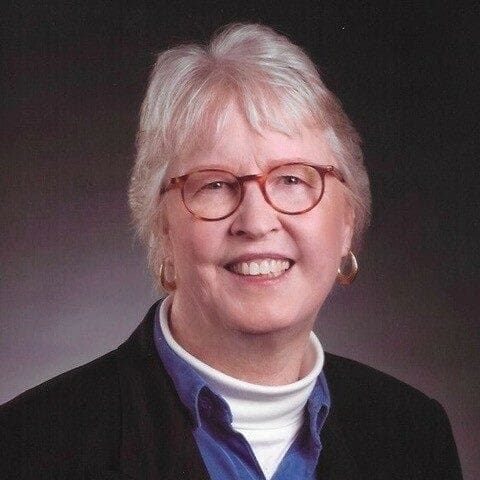 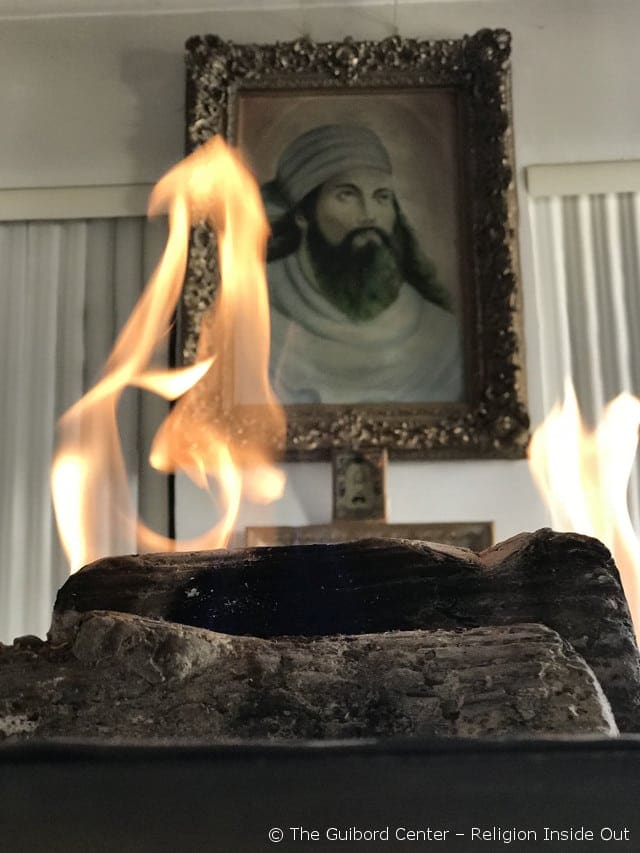 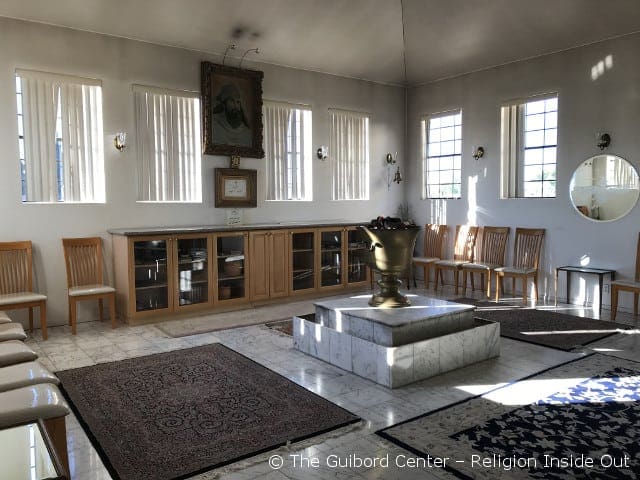 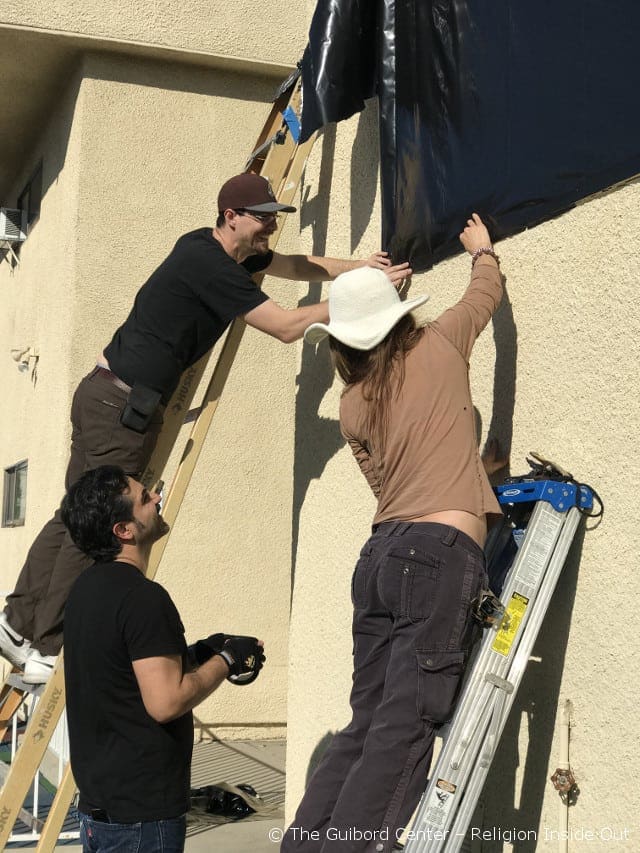 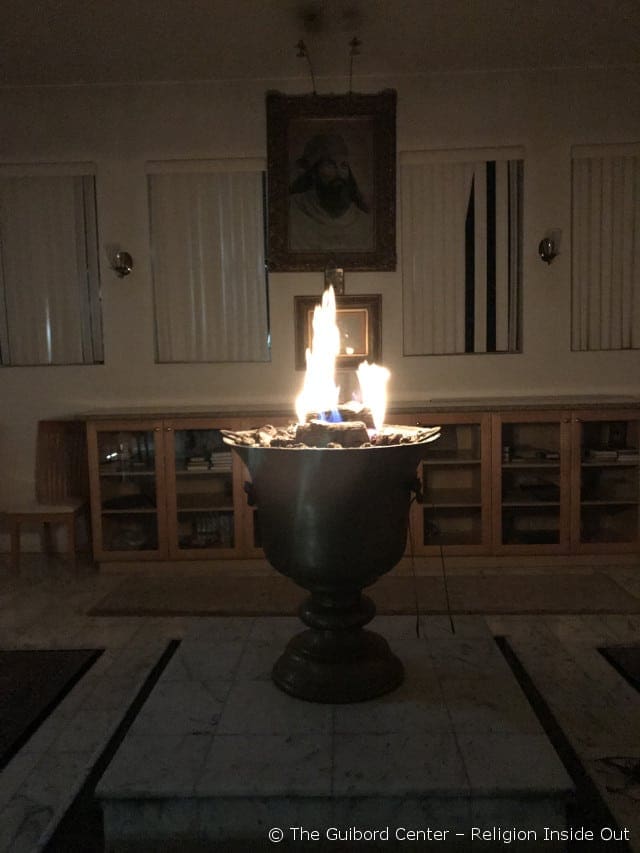 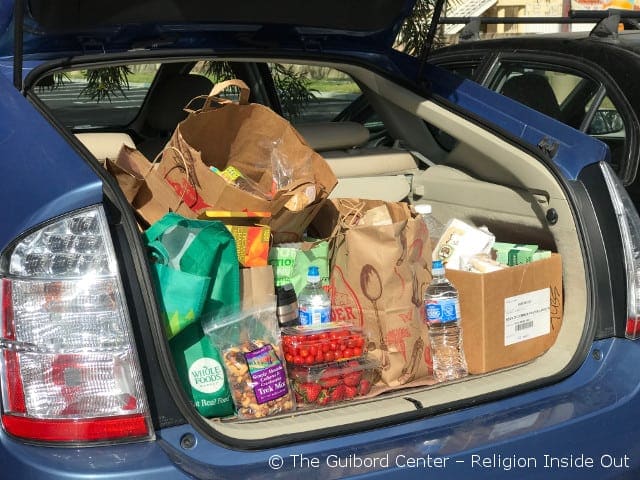 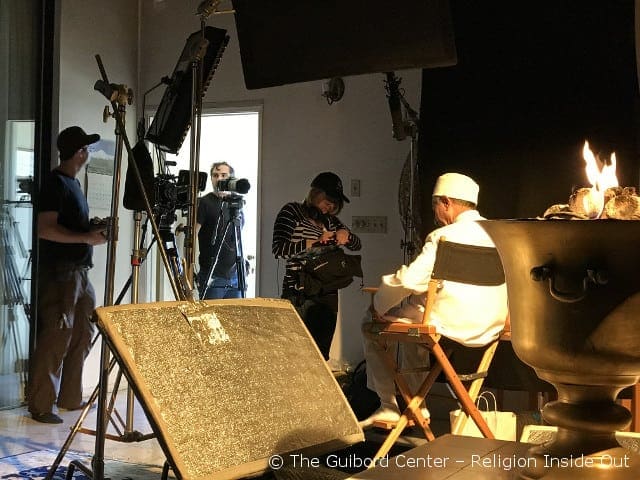 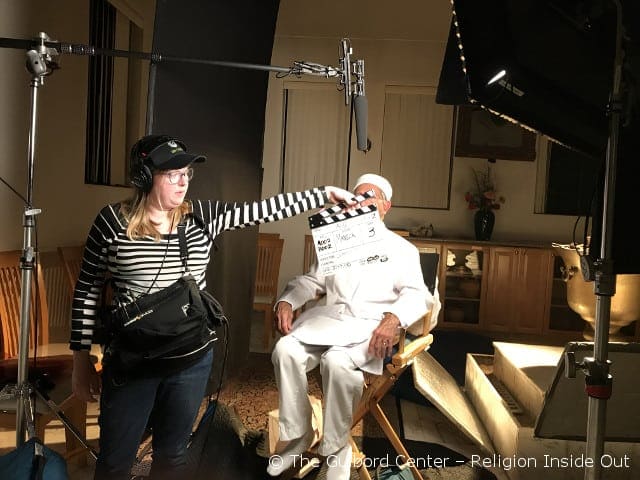 The sun had barely risen when I packed the car with groceries for Day Two of shooting. One of my jobs would be to provide all the meals and a supply of substantial snacks each day. Filming is hard work. There is no time for a leisurely meal. I’d take orders and get the food so we’d never miss a beat.

As it turned out, of the five of us who set out to make a film about animals and compassion, two were vegans, two vegetarians, and one – a sometimes carnivore. What are the odds? In Los Angeles, pretty good, it seems.

So I got on the freeway on a beautiful Saturday morning in February with a trunk full of goodies from Trader Joe’s.I was headed to The California Zoroastrian Center in Westminster, just 40 miles southeast of downtown Los Angeles.

The winged figure high on a plain stucco building surrounded by the three phrases “Good Thoughts”, “Good Words”, “Good Deeds” is what immediately caught my eye. The Persian half-Bull figures on the four columns beneath them erased any doubt. This was definitely The Zoroastrian Center, home to one of the most ancient religions still practiced in the world today. Their numbers may be small but the good they do is remarkable. The Guibord Center’s Zoroastrian Advisor, Maneck Bhujwala, will present the Zarathustri (Zoroastrian) religion this coming June.

Since there was no one in sight, I had a few exquisite minutes to soak in the peacefulness of the quiet grounds. Jennifer, our wise director, had brought us here this early deliberately. The light was soft, magical, just right to capture these images. She knew the unique challenges of filming this faith. Their central image is fire, symbolic of enlightenment, and fire is impossible to photograph in daylight. Soon the rest of the team arrived. As quickly as Joe began photographing the building, Arron began laying out rolls of heavy black plastic sheeting.

I followed our host and speaker for the day, Maneck Bhujwala, up a small flight of stairs, took off my shoes and entered the very simple prayer room where a flame burned before the image of The Prophet Zarathustra. I was instantly reminded of another small sanctuary half a world away, high in the mountains, in the magical city of Safed where it is said that the Kabbalah, the mystical branch of Judaism, was born. In that moment the two rooms with their utter simplicity felt stunningly similar, brimming with the faithfulness of their followers.

I returned to the present as I stepped back into the sunlight to discover that two ladders had arrived. Jen, Joe and Arron were hard at work atop them. They were taping up the windows. Time was an issue. The sun was climbing over the room, which once sealed, would soon get unbearably hot.

Once the room was completely blackened, it was time to bring in our own lighting. Framing for the filming was about to begin, measuring the angles between Maneck, the photo of the Prophet and The Fire. The wind pulled at the plastic as we raced to get everything in place. We re-taped. We closed the door to control the light. The flame danced brightly. The room grew hot. The sun was high now, beating right down on us. We had to open the doors while we broke to eat. The staff offered us tea, food and a place to sit. We ate quickly. Finally, everything was in place. Opening the doors had cooled the room for the moment. Our Sound Tech, Madison, nodded to let us know the last of the sound checks was completed. We were ready to begin.

Jen spoke softly. Maneck replied. His voice, quiet at first, grew stronger. He gathered a rhythm, an authority. And then it happened. For the second day in a row we had to halt everything.

The first series of explosions sounded like ammunition going off in a fire. There was a brief pause and we opened the door. Firecrackers. Loud, very loud. Exploding just over the fence. Not again! We were confused and suddenly it dawned on us. Chinese New Year. “The Year the Dog”.

We found we were in the midst of an Asian community preparing for a parade. They were right next door. The megaphone carried the songs, the music. We looked at one another. There was nothing to do but laugh and wait. We had done all we could to prepare, but ultimately this whole project would be far beyond our control.

← Prev: The Measure of Faith - An Incident at the End of Day Two Next: Interfaith Educational Resources Spring 2018 → 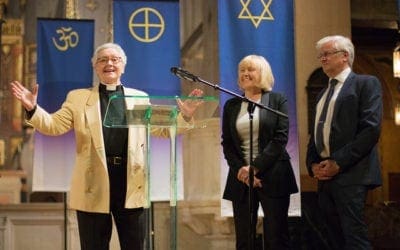 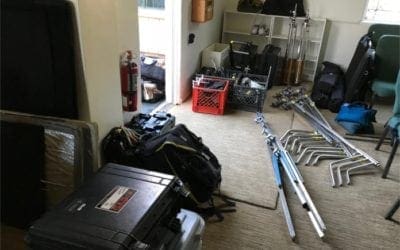 In the last 14 days of February a tiny, five-person film crew representing The Guibord Center traveled to 12 different... 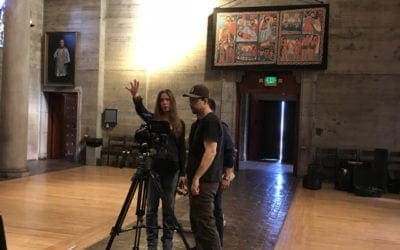